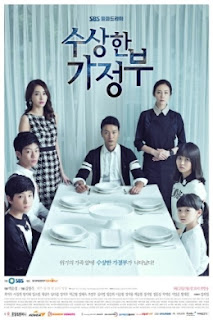 After the sudden death of his wife Eun Sang Chul (Lee Sung Jae) decides to hire a housekeeper to do the housework while the family starts to deal with the passing away. But when the housekeeper arrives he and his four children are surprised to meet Park Bok Nyeo (Choi Ji Woo) a cold woman, who doesn’t change her facial expression, nor does she meddle in family affairs, and weirdest of all she will do anything she is ordered to - no matter what it is. The youngest Hye Gyeol is smitten by her and accepts her right away, while everyone else is suspicious. And it doesn’t help that she refuses to talk about her past or family.
Things go crazy in the house when the children find out that their father had an affair, and that the mother might have ended her life because of it…

The less you know about a drama, the more interesting it is! I honestly didn’t expect this to go this way, it ended up being pretty action packed! Or whatever you would call it. I have to say I was pleasantly surprised by how they managed to fool me, and I really have started to like Choi Ji Woo. And OMG, that stalker! I mean I was so crept out.. Like I get murderer, even killer, but damn he was creepy - even though he was handsome.. Besides that the fathers character was one of my favorites, he was honestly one of the best characters in this drama, some might disagree, but out of all the most humane of all and the one that showed most growth out of all. Like in 20 episodes, he grew. Which is most important, honestly. Same for the neighbor, really didn’t expect it.
That said, there are so many bad things as well. To start off it really is official, I don’t like Wang Ji Hye.. No matter if she acts like a villain, the heroine, side kick or just is there, she annoys me.. Every single time I see her I just get disappointed. So Hyuns story started well, but then she got an unnecessary love story which didn’t even get any attention, and left me just angry at the end. Now that we are on the subject of love, they should have given the main love story a bit more space.. Seriously, words are not enough.
Lol, when I started this, I sort of thought I had a lot, not as much as I though. :P
Anyways, I didn’t give many stars, but it really is a new kind of drama, much different than the usual Korean melodrama.. Occacionally too much, but surprises you often.. So I would give it a shot if I were you :)