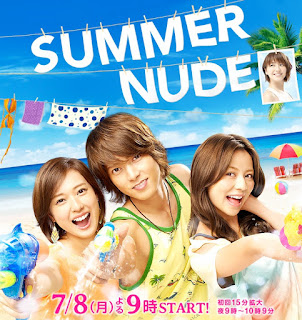 This is a story about three people changing their lives over a summer.
Chiyohara Natsuki (Karina) is getting married in a small town close to the beach. Prior to the wedding she was chef what she had always dreamed of becoming, but she gladly left it behind so she could be with her fiancé. On her wedding say though, her fiancé decides to run away, leaving her devastated and without anything. Capturing the worst moment of her life is Mikuriya Asahi (Yamashita Tomohisa), a wedding photographer who lives near the beach. After the eventful day, Asahi reluctantly sends the bill for the wedding photos. With the bill he attaches a note saying that he wishes her happiness and hopes that she will find her smile back again. This message makes Natsuki call Asahi, to thank him, but as friend’s restaurant is without cook, Asahi asks for Natsuki’s help. Thinking it’s only a day, Natsuki agrees, only to be met by expectations to stay an entire summer. After meeting the people of the town, and being persuaded by Taniyama Hanae (Toda Erika) Asahi’s best friend, and who has a 10 year one-sided-love for Asahi, but was always disregarded because Asahi can’t get over his first love Ichikura Kasumi (Nagasawa Masami).
Asahi had waited 3 years for Kasumi to return but in vain, so Natsuki decides to help Hanae out and get them two together, only to start something she wasn’t expecting..

I don’t know, I really don’t. I mean what the hell was it about, no idea, who was I rooting for, no idea. The drama has heart - I think - but it somehow ends up being too ‘celebrity preoccupied’, I mean no one in their real mind would shift this fast to another love story, if they cared for their characters. It’s like a game of ping pong, seriously hitting the characters back and forth as if they are really nothing more than puppets. It really loses all form of reality, and everything in that sense. There is no way people bounce that fast, and there is no way they can be THAT easy to fall in love with. I don’t know. Maybe I was expecting a bit much. I was hoping for a good Yamapi love story :( but got some bad ping pong game instead…