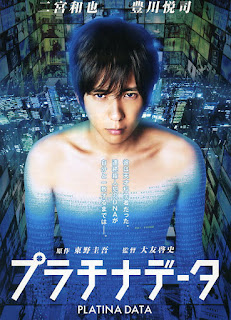 When a serial of child murdering hits Tokyo, the NPA (National Police Academy) decides to call in the SARI (Special Analysis Research Institute), who say they have found their perpetrator. The man in charge, Kagura Ryuhei (Ninomiya Kazunari) is the system development manager, and he introduced the NPA to the ‘DNA investigation system’ test case no. 1, where the found DNA had lead them to not only know about the person but also how he looks. After he is caught, the police officer Detective Asama (Tokoyama Etsushi) notices that there had been obtained illegal DNA from a patient, which had lead them to the perpetrator. He confronts Kagura, who tells him that soon enough all DNA would be obtained legally from all Japan, and made onto a main DNA hard drive.
Three months later, a sibling pair gets killed in the SARI, who had also been involved in the making of the DNA system, and being caught on camera, Kagura had been last seen with the sibling pair. After the DNA is obtained, Kagura himself goes to check it out, and finds that the DNA matches with him. In shock of the result Kagura starts running, but the SARI has cameras all over Japan, and he becomes the prime suspect in the case, making him on top of the list.
Running for his life, he meets his assistant who tells him that she believes him, also she confines in him that the victims were making a side project called MOGUL, which she believes is the reason for their deaths. Now Kagura has to find out what MOGUL is, and make sure he isn’t caught in the progress…

My first reason for watching this was of course Nino, and ten minutes into it I didn’t like it. After a little while I started getting interested in it, like it made me wonder and then I was caught. It is an action packed movie with lots of good sides to it, but I have to admit, I really am not a fan of action/chased movies. Not because they are bad, but just simply because I need more conversation. I need logic and hell I need depth. They did try to give me that here, but it just somehow seemed forced. I like the backstory, but I kind of got confused by the absurdity of the ending. Japanese really know how to freak you out. That said, there isn’t much bad about it, it really is a movie in it grand self. Recommendable.