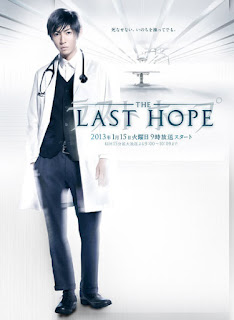 This drama revolves around a group of special doctors, who just recently were hired in one of the up-to-date hospital as a form of special team that help people who are at their last chance of getting cured. Hatano Takumi (Aiba Masaki) is a strange fella who has to eat a snack when the clock hits 3pm. He is different than the rest of the team since he is the only one not having a specialty. He is a “country doctor” meaning he is a doctor from a small village, and has helped his father in the family clinic. Being haunted by images from his past and having a scar on his body he can’t really explain, Takumi one day notices a newspaper with faces of the people he remembers from his childhood. Tachibana Ayumi (Tabe Mikako) is known as “The Machine”, meaning she never gets emotional about any cases, nor does she try to connect with her patients. Due to this she is being sued for malpractice by a family who believe that she is guilty for the state of their family member, this also gets the attention of a journalist who has found out that Ayumi is actually Aitani Kiko, but changed her name due to her father’s mishaps. Besides these two there are Takagi Junji (Tanabe Seiichi) a player ‘look-a-like’, but in fact has a deep emotional scar from losing the love of his life because of an illness. Ogiwara Yukiyo (Koike Eiko) a mother, divorced due to her husband’s infidelity, who wants to find the person who was responsible for her mother’s death. Soejima Masaomi (Kitamura Yukiya) the son of a hospital CEO who has had problems with his marriage, and Komaki Toshiaki (Kohinata Fumiyo)a researcher who lost his son, but refuses to believe so.
Every doctor has a past and dealing with, along with trying to be the last hope for their patients…

This is officially my favorite Aiba Masaki drama, and my favorite Japanese medical drama. I love that the backgrounds of the doctors is shown and every story is taken care of, and I love that there isn’t really a love story, I mean sometimes you just shouldn’t add one. It does have love stories in it, but not as the main story which made it more enjoyable than expected. I love that every character is its own and that they really have this individuality - also that they all somehow connect without crossing paths. I never really imagined Aiba as a doctor, but it really worked for me, also I didn’t expect to like Tabe, but I did.
Without trying to ruin the drama, I’ll just go ahead and recommend t :)