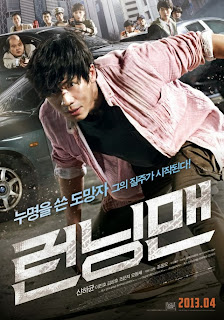 Cha Jong Woo (Shin Ha Kyun) is a former criminal, a pretty small criminal, who got a son as an 18 year old. Now his son, Cha Gi Hyuk (Lee Min Ho), is a high schooler and Jong Woo works as both a cab driver and a mechanic at an auto repair garage, to supply for them. One night while driving cab a costumer jumps into his cab and offers him great money. Jong Woo blinded by easy money offers to be the costumer's driver and gives him his number. They make a stop at a place and while the costumer is out to ship something, Jong Woo goes to the bathroom. He returns to the cab and the costumer is in the car waiting. So they head on to the next destination. They arrive at a parking lot and Joong Won notices that the costumer is not awake, so he gets out to help him thinking he is drunk or so. But then he suddenly sees that the costumer is dead. Right at that moment a security guard passes by and sees that something is wrong. This whole thing even got filmed by the CCTV and Jong Woo is now the prime suspect. He starts running away and soon recieves a weird message, from the dead costumer's phone, the picture of the Eiffel Tower. This picture is worth more than he thinks and he is now chased by both the police and a group of men trying to get his phone.

I reeeallly enjoyed this movie. It is so much fun while still having that thrill. It is sad, serious, thrilling and fun all at once. This movie didn't get very good rating (3 out of 10 by Film Business Asia) which I in one hand understand and in other dont. I think maybe the movie is not on the same level as, let's say Thieves, but it is definetely better than many asian action movies Ive seen! It was exciting and funny the whole time. I really do recommend this movie if you like action, thrill and comedy. Its a movie you would enjoy on a weekend evening. It might not be for those that arent too crazy about the genre. But it worked for me. And the action scenes were quite alright. There was quite a lot of falling and you start thinking shouldnt there be some broken arms/legs by now hahah but there isn't and flying (Thank God!).