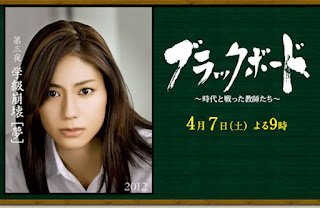 This is the last one out of 3 stories about the school system changing in Japan.
Takizawa Momoko (Matsushita Nao), on the verge of a breakdown, runs home in tears after her pupils make a fool out of her. She has been bullied by her pupils ever since a student named Omiya Masaki (Kamiki Ryunosuke) begun to ridicule her and effecting the class. As she feels cornered and decides to jump from her terrace, but is pulled back by her mother, who talks sense into her. Not wanting to give up, she gets her act together and hits hard on the pupils actions. This she succeeds by intimidating the students with point loss and adding bad resumes if they don’t listen. Every student complies, except Masaki who says his famous line “I don’t understand”. When in class he refuses to do his assignment, Momoko notices that something isn’t right.
Maybe Masaki really doesn’t understand? This becomes the start of a row of misunderstandings…

Despite the fact that it reminds me of all other Japanese high school dramas, this one is much more a realistic story with the actual student issues. And the teacher really shows the hardships of being a teacher vividly. On the other hand the ending seemed a bit too cliché-ish, but that’s Japan for you. The characters, young and old, were portrayed well and show the growth of a young actor (Kamiki) which I enjoyed a lot.
That said, this is probably the one everyone would see considering the time.