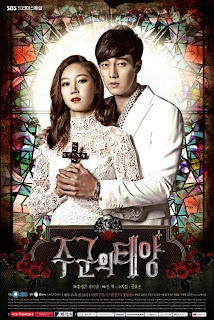 Joo Joong Won (So Ji Sub) is a cold CEO who only thinks about his "Kingdom", his hotel and mall. As a young teenager (L) he had somewhat a traumatic experience, being kidnapped and watching his first love die. However things aren't exactly what they looked like, but only Joong Won knows. There is a rumour that he is under a curse, as he turns down proposals, and never has a succesful relationship. Unexpectedly, on a rainy night, fate brings him to a place out of town, where he ends up meeting a strange woman, Tae Gong Shil (Gong Hyo Jin). Tae Gong Shil had an accident, and ended up in a coma for 3 years, after she woke up she could see spirits/ghosts. Because of this somewhat unfurtunate ability, Gong Shil was forced to stay in here small rooftop apartment, disclosed from the rest of the world. Only ghosts come to visit her, because to them, she shines brightly like a sun.  Tae Gong Shil notices that ghosts do not get close to Joong Won, so she starts following him. He on the other hand does not like her nor believes in ghost, but when she tells him she can see ::::, his first love, he suddenly sees the oppertunities that lie in her ability.

I had so much fun watching So Ji Sub's character, his hand movements, which he did so much were fun to watch. Again he lives his character, very typical his acting, he becomes his character. I didn't see anything wrong with the acting of the others either. You kind of have to get used to Tae Gong Shil, not sure if it's the actress, I dont think I have watched here in a drama before. Also we had that thing again where this guy, Seo In Guk's character, thinks that he needs to protect Tae Gong Shil, and Tae Gong Shil ends up being this voulnerable girl who needs protection. That annoys me, but it's a part of her character maybe. Overall it is nice and it's not hard to watch. It had plenty of funny moments. Though it does feel like your average drama, didn't have a WOW effect, you still enjoy it since it's relaxing and not stressful.

After reading Jenji’s review I really didn’t want to watch this, I mean if it IS So Ji Sub, it better be WOW, but she said it wasn’t so I was afraid I’d dislike it. BUT I’m honest by saying this, I really enjoyed it. The back stories were seriously heartbreaking, and the two were just great together. I haven’t really seen Ji Sub in this kind of comedy role, but it suits him, and wow, I really had a blast. I mean sometimes it was so funny, I couldn’t stop laughing. And Gong Hyo Jin is my favorite actress, now I said it! Beside the three last episodes, which somehow felt like fillers, I have to say one of the best dramas of the year (I don’t care what Jenji says - I liked it a lot).. Also I’m crossing my fingers that these two actors get married! Hmph!
So, should you watch it? YES! I recommend it, very much so!