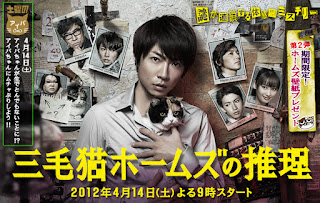 Katayama Yoshitaro (Aiba Masaki) is a detective really unsuitable for the job: he is afraid of heights, blood and women. He loves doing housework, is incredibly naïve, believing everyone, and is very gentle and too nice. Being forced to be a detective by his older brother Katayama Hiroshi (Fujiki Naohito) and younger sister Katayama Harumi (Oomasa Aya), due to the family’s percept “One family, one detective” meaning that there is every generation has to be one detective. Hiroshi dreams and strives to become a novelist, and Harumi is working part-time jobs dreaming of becoming an actress. The two basically don’t let Yoshitaro quit his job so the two can do whatever they want, even when Yoshitaro takes a resignation letter to his boss, the siblings make sure to go to his workplace and take back the letter.
After his 4th failed resignation, he and his fellow co-worker detective Ishizu (Okura Tadayoshi) are assigned to go to a girl’s school, where Yoshitaro sees a cat. He is warned about the cat having a reputation of scratching and biting people so no one wants it, but when he approaches the cat, nothing happens. The cat is introduced as Holmes, and when he takes it home he is surprised to see the cat transform into a human form (Matsuko Deluxe), but only in front of him/in his eyes. When a murder happens in the same school Holmes helps Yoshitaro, and slowly Yoshitaro becomes better and better at his job.

This is a very family oriented drama, which focuses on making the audience guess who the killer is. Presenting the evidence do that everyone understands, and having a family discuss the issues makes the audience get involved and helping them guess the methods and reasons. The cats as ‘Holmes’ gives it a humorous side to it, and having the lead actor not being interested in being a detective makes it funnier than usual police dramas. This drama suits Aiba the most, and fits his personality almost perfectly.
I did enjoy this mainly because it’s not as annoying as the typical dramas, and it’s very light, meaning a great break from all other dramas. A good Japanese drama.