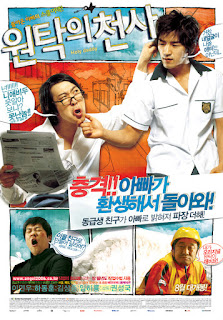 Being in and out of prison for some time now Kang Young Kyu (Lim Ha Ryong) is to leave it in less than 24 hours and looks forward to see his son again, but when he is asked to play kickball in the prison he meets an accident and dies in matter of minutes. His son Kang Won Tak (Lee Min Woo) feeling that his father has abandoned him all his life, and now ‘run away’ by dying, has started hating him. When the angel of death is to pick up Young Kyu, Young Kyu is reluctant and refuses to go until he is able to go back and become his son’s best friend and ask for his son’s forgiveness.
That is when the angel decides to send Young Kyu back to the as his younger self (Ha Dong Hoon - Ha Ha), a kid of the same age, so that he can get what he wishes for. But Won Tak isn’t exactly a model student or a nice one at that…

Oh wow, I didn’t expect to like it this much. It is very typical, but has a great storyline and ending - caught me by surprise. It had a realistic feel to it (LOL, if the entire ‘second chance’ thing really exists that is), and shows somewhat a half-romantic picture of the Korean people. But then again, most movies do.
Lee Min Woo was the reason for me to watch this, and I realized why he didn’t do anything else, he really is not actor material - though he did well at the end.
All in all, a good and nice movie, recommendable!