That Winter, The Wind Blows Review 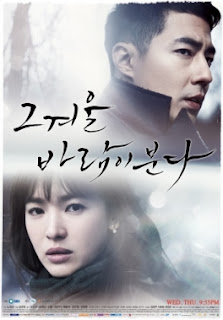 Title: That Winter, The Wind Blows

Having been abandoned as a child Oh Soo (Jo In Sung) has learned not to trust anyone, and also does not believe in love or commitment. Together with his best friend or right hand man Park Jin Sung (Kim Bum) they earn money and live by swindling and gambling from the rich and powerful.
When their fellow roommate, who shares the same name as Oh Soo, tells them about his past, being the long lost son of the chairman of the PL Group, the two just laugh it off. But when a blind woman named Oh Young (Song Hye Kyo) seeks out her brother, Oh Soo reluctantly reads a letter written from her brother.
Shortly after their encounter, Oh Soo is hunted down by the police and by fate runs into his roommate Oh Soo. While running, the friend gets hit by a car, and Oh Soo is arrested.
A year later, Oh Soo finds out about his 7.8mio debt, and the fact that his roommate has passed. Now with no money, no one (except Jin Sung) to trust, he tries to come up with 7.8mio, but without any luck. That is until the attorney of the PL Group comes to find the long lost son of the chairman, called Oh Soo…

This was one of the Korean dramas that without starting I knew I would have a harsh time getting it done. It is draggy and stuffy, and you really just wonder sometimes why on earth you started in the first place, but to tell you the truth, it is so well acted that everything is kind of not important. The cast does an amazing job, and even though the script and screenplay suck pretty much all the time - and not to mention the mean AND ridiculous climax - you sort of enjoy the drama. You get worried, you get sad and you get hyped, though by the end you actually are mostly glad for it to end, or I was at least.
It is a classic, or has become a classic, meaning very Korean, and all that Korean dramas stand for - stuffiness, dragginess, melodrama and occasionally theatrical? Anyways, if Korean dramas are your thing, this is a good watch.