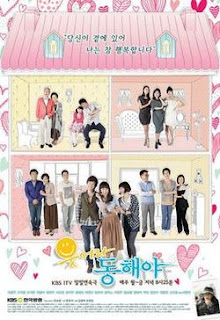 Training to become world champion in Speed skating, Carl Laker (Ji Chang Wook), or Dong Hae in Korean, gets the opportunity of a life time, becoming a representative for the American team. As the team is travelling to South Korea to join the finals, Dong Hae doesn’t have any other options but taking his mentally challenged mother Anna Laker (Do Ji Won), with him - all without his coach or team knowing. As a child of a adoptee, Dong Hae has never been in Korea before, but looks forward to see his girlfriend Yoon Sae Wa (Park Jung Ah), who had been living with him in New York, again. His plan is to propose to her, win gold and return to America. His mother on the other hand, dreams of finding Dong Hae’s father, James, whom she had met 27 years ago in America, and had been waiting for to return. This has made Dong Hae hate James more than anything and always ends up fighting with his mother about it.
Arriving in Korea, where Sae Wa was supposed to pick up Anna, but due to her work she sends Lee Bong Yi (Oh Ji Eun), her childhood friend. Bong Yi’s family has had a rough time: her fiancée decided to leave her 7 days before the wedding, Bong Yi’s brother Lee Tae Hoon (Alex) keeps failing his exams, and the family keeps getting into more and more dept because of the failure of their Kimchi factory, which they blame the known journalist, now director, Kim Jun. Scraping money, Bong Yi agrees to fetch Anna, only to be seen by Dong Hae, who thinks she is kidnapping his mother. After clearing the misunderstandings, they meet again under worse circumstances: when Sae Wa is approached by Kim Do Jin (Lee Jang Woo), a Chaebol, she sees and opportunity to rise in society, and decides to dump Dong Hae, but Dong Hae won’t give up that easy…

Wow, this was by far the longest and draggiest drama ever, but yet I sort of enjoyed it. It is very typical with the hidden birth, the chaebol fight, and the horrible treatment of the lead actor and his family and friends. Thought this is the first time, for me that is, is that everything is sooooo accidental, like everyone had a back story with one another. And lot of the time is spent with talking about NOT finding out something or “did father find out?!” etc.. I love that it did twist in the end, where I actually and genuinely felt bad for the supporting actress, and sort of hoped the best for both her and the supporting actor.
This is a good drama if you are a fan of Ji Chang Wook, or any other actor, since they do a good job, but you better love him or them, because 159 episodes is a lot of episodes. I almost cried when I finished…