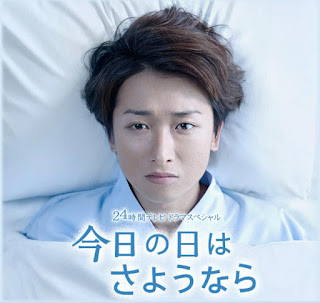 Fujioka Kouta (Ohno Satoshi) is a bit of a lazy guy, who somehow managed to get a job at a restaurant. With no future aspirations and being cowardly about proposing to his long timed girlfriend, Kouta lives day by day like a normal person. One night, after taking his girlfriend home, Kouta passes out on the sidewalk and brought to the hospital where he is informed that he has a kind of blood cancer called “Myeloma”, which luckily has an 80% chance of survival. Kouta starts his treatment with chemotherapy, and befriends a kid called Harada (Yamada Ryosuke), who suffers from the same thing and had suffered form it ever since he was 8, which also left him without a leg.
This story is about Kouta fighting his disease and learning that there are things in life you can’t get around no matter how hard you fight…

Okay, bias aside, this is one heck of a special, with the entire package! Like I cried the entire time, almost 1½ hours straight! Though I was crept out by Yamada Ryosuke’s character I have to admit, he did a good job. Ohno delivered spot on, and I really believe he has an amazing ability. The story is not high thriller or completely exciting, but it does captivate you, and you do feel every moment of the screen story, from the lead actor to the supporting cast.
The only thing about this is that it is a special so I can’t really give it 5 stars, but you do get a great story, amazing acting, and it really is recommendable. I personally believe that it is a must watch story.