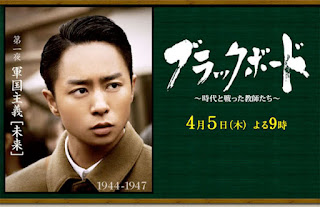 This is the first out of 3 stories about the school system changing in Japan.
In 1944 Shirahama Shohei (Sakurai Sho) proudly announced to his class that he would be going to war fighting the Americans in the Second World War. Encouraging his students to do the same after they graduate, he leaves filled with honor and pride, fighting what he calls the ‘Holywar’.
Three years later and the war has ended, Shohei returns home from the frontline, he is shocked how people from his own town are acting, and mostly how drastic the school system had changed. Losing an arm in a bombing situation, Shohei returns to find out that his father, brother and brother-in-law both lost their lives in the war, leaving him as the sole man in the house. Returning to school, he is offered a job, in which he decides to call together his former students, to see how they are. But out of 40 students 6 students join, blaming him for the loss of their friends. Realizing what he has done, Shohei starts to doubt his capabilities as a teacher…

Hmm, as I said before, I like school dramas, and I like Arashi, but somehow this didn’t go that far for me. It is very interesting, from a history point of view, but I didn’t really feel the ‘school’ in this. I liked Sho’s performance, and I enjoyed the special, I did honestly. But it was not what I had expected, and it didn’t really “fill” me, meaning I didn’t feel I got enough.
I can’t really say much, except that it has heart, and it shows a teacher growing with his pain and changing his life. I would recommend if you like history and if you like Sakurai Sho.