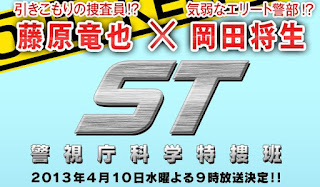 “To cope with diversifying of crimes, the Metropolitan Police Department gathered the top 5 investigators from the National Research Institute of Police Science.  Then they were granted with a special investigation privilege. It is called “Scientific Taskforce”. ST” for short. This is a special unit to fight against crime and destroy the wicked by the use of science as their weapons.” (Intro)
Becoming the captain of his very first team, Yurine Tomohisa (Okada Masaki) is surprised to find out that his team seems very cold. The so-called ST is a team of 5 people: the leader, Akagi Samon (Fujiwara Tatsuya) who is a forensic medicine expert, Aoyama Sho (Shida Mirai) a profiler with a master degree in psychology from US, Kurosaki Yuji (Kubota Masataka) a chemistry expert, Yamabuki Saizo (Miyake Hiroki) another chemistry expert and Yuuki Midori (Ashima Sei) a physics expert.
When a, what seems to be a random shooting occurs, the ST are called out, but are met with dislike by the rest of the police force, mainly due to the ST teams attitudes. Yurine soon finds out that all members suffer from medical condition such as insomnia, obsessive-compulsive behavior, severe claustrophobia, aichmophobia (fear of sharp object) and the leader himself is a hermit, basically is a hermit with face to face situations. He himself is a perfectionist, and soon realized why he is put in the group as the captain..

I like it, a lot actually. Weird people, a great cast, and on top of that a good storyline, makes me happy. I actually hope they would make a drama out of this, because I really had a good time watching this. Even though I sort of knew who the killer was, I have to admit, I really did like the way the story progressed. Instead of saying it was about figuring out the killer, it is more about these people and how they persuade everyone else to believe them, which makes this kind of like a rapid talk drama (they speak fast when they explain stuff, expecially the leader, phew!)
Anyways, a good 1½h spent on this, NO REGRETS!