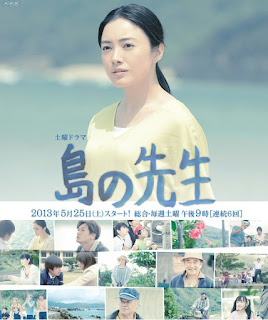 In a remote Island in Kagoshima, a small school takes in children who have educational issues, such as bullying and absence. The school doesn’t have more than 11 students from grade 1 to 9, but the students are close to each teacher and manage to build a close bond. Natsumura Chihiro (Nakama Yukie) was ones a student in that school, and is now a teacher for older kids, there. Even though she hated the school as a kid, she returned much to people’s surprise, with a hidden reason.
Together with the few teachers in the school she deals with the problems of each student, and faces their situations with them.

Hmm, I was very excited to watch this: one, because I like Japanese school dramas, two, it’s Nakama Yukie. That said, I have say, I don’t really remember why I liked Nakama Yukie.. I mean, yes Gokusen, but she is not that good of an actress, I mean her way of standing is just uncomfortable and awakward. I thought that was her charater in Gokusen, but I guess it isn’t.. She really stands like that.
Besides her, the kids in this drama were very good at acting, and the storyline is very adult like and sort of grows on you - even though its only 6 episodes..