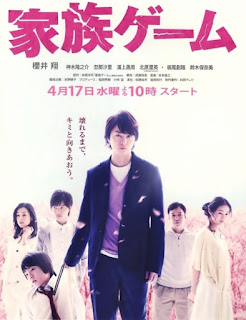 When their youngest son Shigeyuki (Uragami Sheishuu) becomes a hikkomori (hermit - meaning locking himself in his room), the Numata family simply can’t make him go to school. The father and the head of the family, Numata Kazushige (Itao Itsuji) is a workaholic who only focuses on results. The mother, Numata Kayoko (Suzuki Honami) is an at home mom, who doesn’t know how to deal with her sons, or family. And lastly there is the oldest son of the family, the perfect son and straight A’s student, Numata Shinichi (Kamiki Ryunosuke).
After having tried several different tutors, they stumble upon an ad saying his success rate is 100% to Todai University; they hire the tutor called Yoshimoto Kouya (Sakurai Sho). The family’s goal is to make Shigeyuki return to school, which Yoshimoto promises that he will make Shigeyuki return in matter of a week, as long as the family doesn’t interfere - no matter what.

I can’t even explain how great this drama is, I mean I was blown away, and it takes damn lot to blow me away. No episode was how I expected, and no ending was how I expected it. Like even the very ending of the drama made me tilt my head and go “Omg, no way”. I have to say, it’s a very thought through and very entertaining. Acting-wise, they could not have made better choices, and Sakurai Sho as a mental person is damn genius. I mean, it suits him PERFECTLY.
So why is this not a 5 stars? Well, if you ask me, there are a few things that are just either not possible or just too convenient, and when you make such an amazing storyline, small details do matter, especially for me who started analyzing the entire thing. But most defiantly worth a of watch.