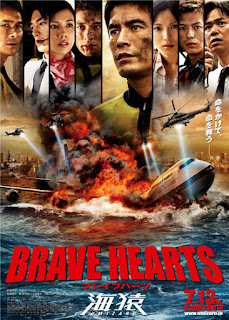 “Because Japan is surrounded on all sides by water... the Japan Coast Guard patrols its maritime borders... through 11 regions. But for search-and-rescue... they have one organization that covers the whole nation. “The Japan Coast Guard Special Rescue Team”, or "Special Ops." They are based out of the 3rd region's Haneda Airport facility. And boast the highest level rescue skills imaginable. They are 36 select members from 13,000 coast guard officers, divided into 6 teams. They can respond to chemical and gas explosions. They're ready to roll out to any part of the country... to step into situations too hazardous...for even the most trained rescue divers. They face various hazards. Confront death on a regular basis. So they train constantly... building up stamina, mental strength... sharpening their judgment and acumen. They are trained for danger. In short, Special Ops are... the last line of defense in maritime rescue. “Japan Coast Guard Special Rescue Team" (taken from intro)
Senzaki Daisuke (Ito Hideaki) has together with Yoshioka Tetsuya (Sato Ryuta) joined the Special Ops, and dedicated their lives to save other people. Now with a 5 year old son, and one on the way, even Tetsuya has started dating a stewardess called Mika (Naka Riisa), whom he plans on marrying soon, they are both have troubles with balancing their love and family life.
When a flight that Mika is on board of crashes in the middle of the sea, the Special Ops are called…

Every movie is stepping up the game, like both emotionally and action wise. I feel kind of sad that this is the last of the Umizaru story: watching this from the very beginning and growing with the characters, and actually seeing every step he takes and every choice he makes which makes you kind of feeling that you know this guy personally. I sort of hope that they make another one, even though I bet that the Japanese are pretty tired of it. The story is good, and this job they are doing is so respectable, which makes me enjoy their interaction.
I do recommend it, even if you haven’t watched the other stuff.