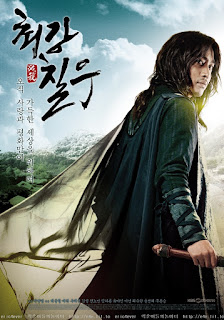 Choi Chil Woo (Eric Mun) is the son of a revolutionist who dedicated his life to change the views on children form concubines, and the general view of slaves and noblemen. After hitting on the “Shinmoon drum” - the appeal hearing drum - which any civilian who wants to appeal any wrong in Joseon Palace, he is, with his followers, tortured and thrown out of the city. Together with his followers Chil Woos father, makes a new town, where status isn’t the core of rule. Shortly after, the town is raided and everyone is killed, except Chil Woo, his friend and Chil Woos his younger sister, Woo Young.
Years pass and Chil Woo is now the son of a Najang (like a police officer of a sort) and has become one too. He lives life by just living, meaning he tries not to get involved with anyone or anything - basically living under the radar. When Woo Young’s foster father is killed, and Woo Young tries to figure out the cause, she is killed in the process, due to a piece of paper everyone wants to have.
The death of sister changes Chil Woos views on the world, and decides to become an ‘avenger’ - an assassin - starting with his sister’s killer. Soon he meets other people thinking like him, and they start to fight the unfairness to the Joseon time, which law can’t fix.

Dear lord, are they serious?! I mean the beginning was great, heck even made me teary, but what happened omg… The storyline is good, the acting is decent, but what’s with the tacky costumes and lousy fighting sequences? Lol, like really. This could have been a really good drama if just they had stayed in the realistic genre. Though, I have to say that of the fair share of Korean historical/period drama this is most genuine towards the situation in the Joseon time. It doesn’t show the romantic view of Joseon, which in reality is much tougher and unfair. This drama shows the difference between noble and non-noble folks, the view of human value, the roles of women, and the true face of kings or just people with the power. That is the reason I’m giving it some stars, also because of the storyline, which I liked and it did entertain me for 20 episodes.
If you are considering it, I’ll just let you know that the beginning is the long tacky part, later on it becomes hardcore, with the entire heist gone haywire, and the assassination of the Crown Prince and all…