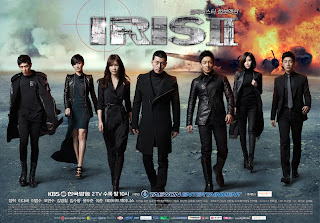 The fight between IRIS, the terror organisation and NSS breaks into fire once again, as IRIS breaks in to prison to capture Baek San (Kim Young Chul), the old chief for NSS and spy of IRIS. While escorting him, Baek San manages to escape and runs into NSS, to whom he surrenders. NSS confused by the whole thing tries to figure out what is going on. Why did the threater turn himself in. IRIS going after Baek San breaks into the place where NSS holds him captive, interrogating him, but they fail. Now NSS needs to figure out, what is it that Baek San has, which IRIS wants so much, and Baek San wants to hide so much, that he would want to be held captive away from them. BaeK San calls the agent Jang Yoo Gun (Jang Hyuk) who saved his life, and passes some information to him about a meeting which will take place in Hungary. Jang Yoo Gun, along side the agents Seo Hyun Woo (Yoon Doo Joon) and Ji Soo Yun (Lee Da Hae) who is also his girlfriend, now travel to Hungary where the meeting between North and South is taking place, and a dangerous situation evovles.

(Trying not to spoil anything with the review, but hoping it will make you watch it *crossing fingers*)
This drama is definitely season 2 of IRIS. At first it is extremely confusing and complicated, and you have a hard time following the story, so you almost end up just watching, and give up on thinking. But it leaves your jaw hanging a few times. And I was amazed by Jang Hyuk and his acting. You know those actors that just make you go like "kkhhhh.. this is what an actor should be like", they act with their whole body, they are aware of every little gesture they make, and they do it on purpose. The rest were really good as well, in my opinion. I did notice in the beginning they had some korean agents speaking english and they dubbed it, I'm not quite sure how I feel about that, is it better than a crapish accent or did it just look too fake? But that is just in the beginning anyway. The other actors did a great job as well. And I actually think that my favorite couple is the "bad" couple. Somehow I liked their love more, it was the mutual love, the natural love. They end up loving each other and caring about each other even though that was not what they were trying. Lee Joon again did an amazing job acting the bad guy, the role suits him, he does it well. And Doo Joon, he did a decent job, not bad but maybe a bit stiff, not sure if maybe his character is like that. The last few episodes I actually didn't feel were as exciting or interesting, the last episode is, and the ending is fine, but before that, it was just a bit messy. A lot going on but nothing really happening. Overall it was great, it was IRIS'ish. But if you havent watched the first season then watch that before watching this one. It's a continuation of season 1.

If I remember season one right, season 2 doesn’t fall far from the tree. It has all the excitement and terror you felt in season 1, in season 2. I don’t really remember a lot of season 1, but season 2 is so complicated and twisted, you go nuts. Like there are SOO many people introduced, everyone is dying, and everyone has some secret one way or another. Different from season 1, I sort of found the ending anti-climaxed, not because it wasn’t exciting but because I sort of expected it to happen. And I believe that the one thing that surprised me the most was that in the last episode, everything was sort of resolved.. I have no clue why and how..
While watching there were only very few that caught my attenstion: Jang Hyuk, Lee Joon and Baek Sung Hyun - maybe Oh Yun Soo - but everyone else, expecially Lee Da Hae, Doo Joon and Im Soo Hyang, annoyed me to the point of actually wanting to end this drama. That might not be their fault, but those characters.. Damn..
All in all a worthy season 2 :)

Hello. This is A.K.I.A. Talking…
Thanks for the great review of IRIS 2! I enjoyed it a lot.
I added it to my collection of reviews for the show. The show has now an average score of 61.5%.
Here is a link to the page if you would like to give it a look:
http://www.akiatalking.com/2014/12/iris-2-2-2013-db-rankingsreviews-page.html
Thanks again for the review. If you want to do something with my blog, please contact me.

Hello. This is A.K.I.A. Talking…
Thanks for the great review of When A Man Loves 남자가 사랑할 때! I enjoyed it a lot.
I added it to my collection of reviews for the show. The show has now an average score of 82.5%%.
Here is a link to the page if you would like to give it a look:
http://www.akiatalking.com/2014/12/when-man-loves-2013-db-rankingsreviews.html
Thanks again for the review. If you want to do something with my blog, please contact me.