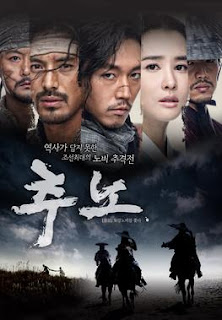 “Crown Prince Sohyeon, who was held as a hostage in Qing after the second Manchu Invasion, came back after 8 years and died a month later from a mysterious illness. Afterwards, Crown Prince Kang was put to death for treason. Two of his three sons who were exiled in Jejudo died from an illness. Only Seokgyeon, the youngest son, had lived.  Crown Prince Sohyeon’s mysterious death, possibly by poisoning, led to a bloody political strife. Half of the people became slaves. The slaves ran away from abuse, and many hunted slaves for a reward. They were called the slave hunters” (Taken from the introduction from first episode)
After his family gets killed by slaves, Lee Dae Gil (Jang Hyuk) becomes a ‘Chuno’: a slave hunter. Together with General Choi (Han Jung Soo) and Wang Sun (Kim Ju Suk) they hunt down slaves and return them to their ‘owners’. Dae Gil blames Un Nyun (Lee Dae Hae) a slave girl whom he had loved, but betrayed him when they were found out by Dae Gil’s father, a Noble Man, she was tortured and about to be sold. She is saved by her slave brother, who, while running away, burns down the Lee Household and the family inside, though Dae Gil believes it is Un Nyuns doing.
Song Tae Ha (Oh Ji Ho) a marked and crippled slave, runs away from his owner, and actually manages to overpower Dae Gil, which has never happened to Dae Gil before, so he sets out to solely find him and bring him back…

I really don’t like period dramas, and this one reminded me of why, but besides that, I can honestly say that this is probably one of Koreas best dramas ever made. The love triangle is really stuffy, and the ending was very ‘Korean drama, but other than that: the storyline was superb, the acting was amazing, the fight scenes and the action were brilliant. The three way bromance was splendid, lol, who doesn’t love bromance? :P hehe..
This drama is a MUST if you love Jang Hyuk, his acting is great, but Oh Ji Ho is nothingtheless marvelous.  I don’t really like Lee Dan Hae, but her acting is also good. I loved the side stories, though there was one that just was annoying to watch (the tavern), but else okay.
All in all, good period drama, but almost too Korean.. (just think of all drama clichés)