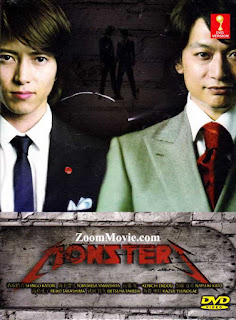 Saionji Kousuke (Yamashita Tomohisa) is a young man who has fighting his was up to become a detective. On his first day as a rookie detective of Tokyo Metropolitan Police Department’s First Investigative Division, he is supposed to meet the Chief, and that is what he does.. he believes. But he is tricked by Hiratsuka Heihachi (Katori Shingo), the odd detective nobody really wants to work with. Hiratsuka makes Saionji do all sorts of weird things making him believe it is all right, since he is the chief, but then when the real cheif walks into his office, Saionji has a hard time explaining himself. The cheif then gives Saionji his mission, which is to watch Hiratsuka and report back any wrongdoing of his, so they can bust Hiratsuka. Hiratsuka is a quite odd person, he is rude yet manner-ly. However compared to the investigation department he seems to be the most capable of solving the mysteries that occur. The rest of the investigation team misses a lot of details and thinks traditionally while Hiratsuka and Saionji manage to catch the small things, using which decide the outcome of most cases. We follow the two solving mystery after mystery.

I must say, this is one of those ridiculous, serious dramas. The humour is ridiculous and it makes you laugh. Bunji recommended this drama, she said she watched 20 minutes and she was still laughing, and I thought well, why not. And it really is those small ridiculous things, like the syncronisation of the police officers, the way they bow, the ridiculous way they handle the cases and such.. but yet it is still serious, when it comes to solving the mysteries, it is quite interesting. But I felt as if it wasn't one of those mystery dramas where you could be a part of solving it. Since it was solved by them being at the scene and seeing things we couldn't see, they had to walk around and look at the crime scene finding things and such. Which made me a bit.. sad? But I was compensated by the laughs lol. It is the kind of detective drama that doesn't make you all tense and completely absorbed, trying to figure it out, it's more laid back, leads you, with fun. Not that it isn't interesting, just not tense. I did enjoy it, it was fun and short. Recommend ;)

Well, the beginning was funny, and the same humor goes on throughout the entire drama. But the murders were just too obvious, especially after episode 2, like I knew who the killer was before the evidence came out. Of course it was interesting to find out HOW, but still when you know the killer, 45min seem long. I liked the last episode story, though again, obvious.
I was happy to see Yamapi in a comedy. And generally an okay drama, just the actors were as the drama, a bit silly (with silly I mean funny yet interesting).