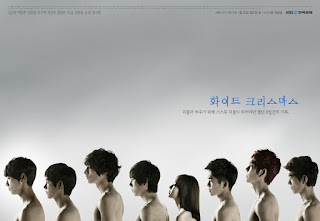 This drama special is about 7 students and one teacher of Susin High School, an independent private school with the 1% of all Korean top students. Anything except studying is forbidden, and they are rating by points they get while attending school.
On a 8 day vacation - from the 24th Dec, 7 students: Park Moo Yul (Baek Sung Hyun) the schools ‘goody’ known for good behavior and has never broken a rule, Yoon Eun Sung (Esom) known as the prettiest girl in the school and liked by everyone, Yoon Su (Lee Soo Hyuk) known as ‘Angel’, because his father donated loads of money to the school and like that managed to occupy a spot, Choi Chi Hoon (Sung Joon) the schools smartest kid never leaving the number one spot at school ranking and the one Moo Yul is struggling to beat in any test, Jo Young Jae (Kim Young Kwang) hated by all students for his patronizing personality and ‘bully’ attitude, Yang Kang Mo (Kwak Jung Wook) who films everything and everyone, but has a handicap, he has and earplug, and lastly Lee Jae Kyu (Hong Jong Hyun) the only one that doesn’t seem to fit in the bunch since no one knows him. The teacher Yoon Jong Il (Jung Suk Won) got the task to take care of the students during the break, but is shortly joined by a psychologist Kim Yo Han (Kang Sang Kyung)who was involved in a car accident close by, and seeks refuge at the school, with a slight head injury.
None of the students like each other and try to stay out of each other’s ways, they at one point find out that they all got a mysterious black letter, written exactly the same way. At first most of them are treating it as a joke, but as time passes by, Moo Yul gets interested in it, and is surprised that all 7 are involved. While trying to figure out the letter, another school mate happens to be at the school, Kang Mi Reu (Kim Woo Bin), the schools dare-devil, who is suspended and wants to make Young Jae, whom he believes is responsible for it, pay for it. All that is put aside, when someone is murdered, and the telephone lines aren’t working.
Now they are stranded in the middle of nowhere, and with a murderer amongst them…

I’m sorry, I was really trying to cut it down, and it somehow became too reveling, then I wrote a lot, and yeah, less revealing: P Any ways, this drama is brilliant, with a brilliant cast (no idols) and amazing storyline. Though I have to admit, I have no idea how on earth it managed to escalate that fast without me rolling on the floor crying. Seriously, like every episode made my stomach turn, not being nauseous, but scared (in a good way) because I really would never know what I’d do in their position. I didn’t like the actress, though she grew on me, and some of the other actor did annoy me in the beginning, but as you watch them you simply wish for their well-being. I really recommend this, sincerely. It is very psychological, but it uses 8 episodes too the very fullest, and the tension does not let you down in any way. The only reason it’s not completely full rated is that there are times when I just knew what was going to happen, like 80% of the time that is.

Kamjis Verdict
Hmm, I really don’t know about this. Would you be surprised if I say I didn’t quite like it… First of all the show is anything but a traditional kdrama.  It isn't romantic.  It isn't funny.  It isn't melodramatic, either.  It's bleak, terrifying, heartbreaking, and disturbing all at once. The one thing that made this series work so well was the cast.  This drama possibly had the best cast I have seen on any kdrama--ever.  I don't say that lightly.  It was a cast of mostly teenagers, but each and every character (okay, with one exception) was layered and complex.  Even the villain of the series had interesting moments of depth that steered clear of caricature.  While I didn't like all of the characters, I grew to understand them.  The cast members were phenomenal at portraying characters who were so human that you hurt for them.
I think maybe what ruined the show for me was that everyone kept saying how dark and terrifying it is… but it wasn’t. I mean everything was perfect, the cast, the plot (I liked), how it was directed, most of the things was good. I just can’t put my finger on one negative thing, so why did it leave me with an unpleasant feeling that it wasn’t that great? I guess I’ll just ponder over that for now.