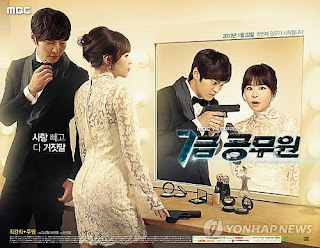 Kim Seo Won (Choi Kang Hee) is the girl who moved from the country to the big city, having several part time jobs while studying for the civil servant exam. She runs around and barely finds time for all the things she needs to do. One day her friend, who has a matchmaking company, offers her to go on a match-making session for money. At first Seo Won declines but after thinking for a bit, she thinks "Why not?", sitting for 2 hours talking with somebody who will pay your dinner isn't that bad at all, and she could use the money. So she accepts. The guy she is to meet is Han Gil Ro (Joo Won), he too isn't there on free will exactly. He is there just to get over with it so he can have his car back. He is the son of a CEO, coincidently also studying for the civil servant exam. Since both of them aren't interested in the match making, they sit for two hours at the restaurant, both studying for their exam, but not knowing it. When the 2 hours are up they decide to meet for another session, since Gil Ro promised his mom that he would go to 2 sessions at least with the same woman. At the second session things go wild and Gil Ro ends up losing a bet, his car, because of Seo Won.  He tries to get Seo Won to pay up, but she doesn't have the money and just wants to get away from him. Which doesn't exactly go well, as they meet again for the civil servant exam, and end up having to go through training together.


As I was watching the drama, I was actually really wondering what the reason for the low ratings was in the last few episodes. Well then I found out. The reason is that the drama almost has two endings. There are two things going on in the drama 1. The bad guys vs. the good guys 2. The relationship between the two leads. Honestly, the fight between the good and the bad is not that interesting, and so when the relationship between the two is okay or whatever, then you don’t feel like finding out how it ends with the fight. So now I definitely understand the low ratings. And I really don’t think that this is Jo Won’s best drama, even though I haven’t watched much if his. It felt as if the last episodes were just filled with random scenes trying to fill out the time, the ending was dragged out too much. Though it was an alright ending, I honestly didnt feel interested. This drama ended up being a revenge drama, but not the exciting kind at all. The message of the drama was fine "It takes more courage to forgive than to seek revenge" but I just feel like it was all messed up. Like two stories flowing together in a bad way or one overshading the other. Anyhow, I only enjoyed the fun parts in the first half of the drama. So I honestly don't really recommend this drama. Even though Jo Won is a great actor, I would rather watch something else. But if you have the time and have watched all dramas then I wouldnt stop you haha!.

This drama started out very good honestly, but somewhere along the line it became halfhearted. The climax wasn’t that climatic, and instead of saying that it was too much about the revenge, I have to admit, I didn’t really care nor notice much of it after J.J’s (Uhm Tae Woong) death. I know it’s a love / police drama, but the romance took too much of the drama, and the entire thing became dull. Though I have to admit, it was great fun, really funny, humor was tip top! And the supporting couple grew on me, even if they didn’t have that much screen time.
I must say I am pretty tired of the female character - just too typical, and annoying, like I remember her being exactly alike in Protect The Boss. But I was happy about Joo Won’s new kind of character (haven’t watched Ojakgyo Family, but compared to all the others) - kind of his real personality.
To explain this in other dramas, I would say the closest is City Hunter and Fugitive Plan B - you feel me? So if that is your type of drama, watch it.