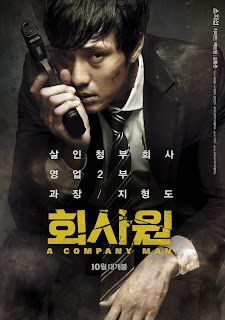 Ji Hyung Do (So Ji Sub) works for a company that seems normal on the outside, but the division he works at, is an organization of hit men. When a temp, Ra Hoon (Kim Dong Joon) is hired to help him out with a job, Hyung Do is ordered to kill Hoon right after, in order to keep it ’clean’. Hoon realizing what has happened, asks Hyung Do for a favor before killing him - to bring his savings to his mother. Keeping his promise, Hyung Do goes to find Hoons mother, and is surprised to see that the woman is his very first crush, ex-teen-idol Mi Yeon (Lee Mi Yeon). Meeting Mi Yeon, Hyung Do starts to realize that there are other things than his ‘work’. The final straw is when he is asked to kill his former boss, who had left the company after his son was killed.
Hyung Do decides that he wants to leave the company - but no one leaves the company at their own will…

When I started this movie, I didn’t really feel like watching it, but after the 30 mark I think, it became really interesting - not all pow wow, but pretty okay. I like the storyline, the entire back thought, without losing its focus of the main theme of this movie - the company. It is really hard to watch something that doesn’t make you excited and this one doesn’t really, not even a thrilling love romance, but for some reason the amazing performance of the actors, make you very thrilled. Of course, loads of blood, killing and awesome fighting involved, but that is not really my cup of tea :)
I would say I recommend it, but not for everyone - not those who like a romance/comedy/mystery/police..