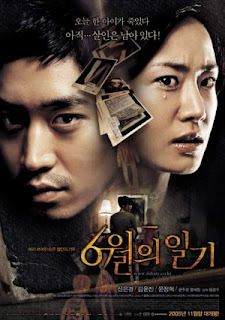 Cho Ja Young (Shin Eun Kyung) a loud and proud police woman is senior in the second crime division. She has a younger rookie partner Kim Dong Wook (Eric Moon) who seems a bit lazy but in fact is good at what he does. When they one day get called on their day off, to apparent suicide by a high school student. But when a mystical capsule is discovered in an autopsy, in the belly of the student, stating that he had killed someone. This someone is a student at the same school who was murdered on a bridge sometime prior the suicide. Ja Young and Dong Wook link them together, but something doesn’t seem to add up, and when another capsule is found in the murdered victim stating that the student who killed himself didn’t actually do so, but was made to look like that, it becomes a case of a serial killer…

This movie revolves around one of the few subjects I don’t like: Bullying. And this movie has some severe bullying to do with. For a movie that is 7 years old, I feel that it is really interesting, and has some pretty reasonable sides to it - like the dilemmas in the movie are still present today, which makes it a classic (though not completely). I love Eric Moon and I was afraid that I might have been biased while watching it, but I really didn’t see any flaw in his acting, though the lead actress sometimes seemed to either overact or just wasn’t in the ‘right mood’. But the two, the duo, they are genius. Like these to personalities and their teamwork is brilliant! Wish there was more :)
It’s not one of those “omg” movies, but it has a lot of either creepy or sad moments, ocassionally freaky.. I recommend honestly!