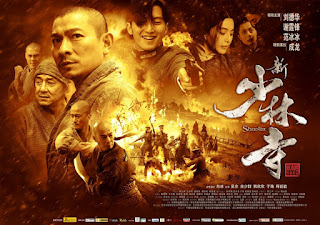 
“While the young Republic was in danger of being invaded by foreign powers, turf wars raged among warlords, creating purgatories as their own people suffer…” (Taken from the movie intro)
Hou Jie (Andy Lau) is a warlord fighting for territory of Tengfeng. After almost vaporizing the armies of Hou Long, the war lord of Tengfeng, Hou Jie sends his best man and right hand Cao Man (Nicholas Tse) to find the fleeing warlord, who has found refuge in the closest refugee camp - near a Shaolin temple. Cao Man hunts him down, but Hou Long manages to run into the temple, where he is protected by the Shaolin monks. Hou Jie enters the temple, kills Hou Long, and patronizes the monks.
Back at home, he meets his sworn brother, who wants to talk arranged marriage with his son and Hou Jies daughter. Being paranoid, Hou Jie commands Cao Man to assassinate his sworn brother, but he is betrayed by Cao Man. Hou Jie manages to run away with his daughter in his arms, to the Shaolin temple, but unfortunately the monks aren’t able to save her and she dies. Enraged, Hou Jie attacks the monks, who quickly subdue him. At the same time Cao Man takes all of Hou Jies belongings and kills all of Hou Jies loyal men, and put out a wanted poster of him.
After his daughter is cremated, he begs the monks to take him in so that he can pay for the sins he has made. Soon he comes to understand the principles of the Shaolin, and decides to be part. But the Cao Man is informed about Hou Jie being alive…

First of all, sorry about the review, I know it spoils a lot. Secondly, I have been wanting to express this movie with amazing words and just give you something wow to read, but I find myself mind blown so I probably will only blabber for the next 200 words.
This movie is one of my favorite Asian movies, which I have to say I somewhat of an accomplishment, since I am very rude to Asian movies, mainly because I prefer dramas and I rarely see a 5 star movie (Some other Asian movies I love: 71: Into the Gunfire, Blind, Never Ending Story, Secret Reunion, Silenced and now Shaolin). Tbh, I really expected a lot from this movie, and it didn’t let me down, in any way. The most brilliant storyline, mixed with the greatest material arts makes this movies unique and awesome!
It doesn’t have romance, not really, but the tiny amount it does have, is more than sufficient. Now the main part of the movie: the fights. I’ll sum it up in three words: oh my god. Even for a “material arts blind” person like me who doesn’t really bother with those, or really cares, I was out of my mind. Like damn!
I 100% recommend, go watch it! NOW!