The Moon That Embraces The Sun Review 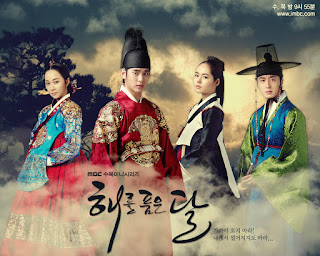 Title: The Moon That Embraces The Sun

The story of a very special crown prince named Lee Hwon (Kim Soo Hyun), who as a young teenager starts a friendship and special love with a young bright girl, Heo Yeon Woo (Han Ga In). In this time and age, kids are taught to be more than just kids, to achieve something greater. Lee Hwon and Yeon Woo meet on a special day: Yeon Woo witnesses the young prince trying to get out of the palace to meet his brother, but she mistakes him for a thief. Without revealing his true identity, the two separate, and it is not until later that they again encounter and grow greater feelings for each other. As the young crown prince is in the age of getting married, it is decided that there should be a crown princess election. As the bright girl of a minister Yeon Woo should join as well, though they know that in fact the crown princess has been pre-decided and the election is just a show as to show the people that regulations are followed. And if 'girl isn't chosen, she will live forever be forbidden to marry. The reason that she won't be chosen is because of the girl Bo Kyung the daughter of a corrupt minister, who alongside the old queen treacherously wants to get rid of Yeon Woo.

First of all I think this is my favorite king character! He is the perfect king. He is smart and nobody can play around with him. It's actually the opposite. Whenever the ministers think they have something on him, he turns the situation all around, he has them around his little finger (is that the wrong saying?) he can't be fooled and isn't weak. He wants the best for the people and often goes out to check the situation himself. I could continue forever. He is cool and hilarious, and his brother as well. And I absolutely loved that they would rather give up the throne than turn their backs on each other. I think the actors fit really well, especially the young crown prince. I just didn't really like the grown up girl. She was a bit awkward.. And that made the love story awkward as well.

Hmm.. I can’t say I dislike this one, but it’s definitely not a favorite one of mine. I had the hardest time finishing it, and it seriously took me over 11 months if not more, to finish. My first ruin for this drama was the fact that I was seriously waiting for Kim Soo Hyun and Han Ga In to come, since I first of all KNEW that they would be this separated couple, and that she would die, since it says so in the introduction of the drama. That took about 7 episodes.. which was honestly the biggest reason for my wait, since it went on forever. Second ruin was the love triangle, and the ridiculous kid like feud between the two brothers, which most of the time is the older brother being jealous of the younger brother. But of course they have to have that in order to please the viewers.. (I was almost about to say stupid).. Then there is the main actress character.. Dull and “blaah”.. Lastly the king, Kim Soo Hyuns character, yes he was fair, but not at all just. I mean what.. Maybe it’s not his fault, but the Joseon have dumb rules, and I till this date really don’t care for these dramas. I really really really really don’t get period/historical dramas, and I have no idea why I keep torturing myself with trying to find out. Anyways.. Acting was great, I guess story too since everyone else seems to love this.. If you want an opinion, if you really like this genre, ask Jenji, I really give up..