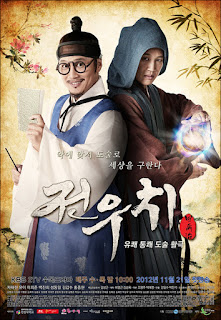 Lee Chi (Cha Tae Hyun) is a reporter in mid-Joseon, and lives life freely and without care, seems carefree and lazy. But underneath his presence, he hides a secret: he can use magic. He is Jeon Woo Chi, student of Hong Gil Dong, who is looking for his master’s killer Ma Sook (Kim Gab Soo) and his friend who betrayed him Kang Rim (Lee Hee Joon) who took away his love and fiancé Hong Moo Yeon (Uee) by poisoning her with magic - basically hypnotizing her. When a man is supposedly killed by a tiger, Lee Chi checks it out and finds traces of Kang Rims trade mark magic. Lee Chi loses the trace shortly after, but when a young girl Lee Hyun Ryung (Baek Jin Hee) steals a bag with some form of seeds from a smuggling ship and her father takes a bite, falling in a form of hallucination/coma, Lee Chi cures him. Soon after a slave, Bong Soo (Song Dong Il) whom lost money to Lee Chi while gambling, is accused for murder, Lee Chi goes to save his own butt, but finds out that the same poison he cured, was used on Bong Soo to make him confess, Lee Chi realizes that Kang Rim is somewhat involved, and follows him…

When I started watching this drama I was surprised how different it was, than the usual Korean drama. It was light, interesting and unique, but after the first half, it turned 180 degrees and it was as if the first part never really happened. And the Wuxia/flying/superpowers idea is a good for a change, makes you curious, or me at last. That aside, I had mixed feelings about the lead couple, not because I preferred a supporting-lead couple, it was just very different. Though the couples around were brilliant: I have a thing for queen-king love stories, and those innocent love stories :) Acting wise, mainly good, just occasionally odd, not bad, just odd, which was supposedly part of the drama. Lastly I would like to comment about the length: I don’t mind 24 episodes have done way more, but it is as if they really did everything to make it extra-long, adding extra stuff. But it’s not draggy like those other dramas, and not as stuffy (depends on how you see it and what interests you).
All in all recommendable for the playful soul.