Salamander Guru and the Gang Review 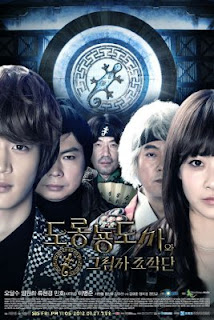 Title: Salamander Guru and the Gang

This short sitcom is about two petty thieves, Seon Dal (Oh Dal Soo) and Won Sam (Im Won Hee) known as the “Mapo Lupang” burglars with the trademark of not stealing anything and leaving a toilet full with poop. After managing to run away from their latest ‘crime’, to a house owned by a Guru/Priest (Lee Byung Joon ) known to do precise fortune telling’s. They break in the Gurus house and by accident shock the Guru so he chokes on his food. Thinking he has died, and pressed by the next clients they dress up as the fortune teller.
At the same time police woman Kyung Ja (Ryu Hyun Kyung) who has a bad day - and stomach ache, is called for work at the “Mapo Lupang” case, so she runs in and uses the bathroom in the burgled house, thus getting cut of the case for flushing down the criminals poop and DNA.
The news about the “Mapo Lupang” thieves spreads and reaches Min Hyuk (Choi Min Ho), a genius hacker, who immediately finds their location and starts to stake them out. The two thieves bring the Guru in the basement and take his place, to make money, by just talking about the obvious to every client arriving.
After begging for a sometime Kyung Ja gets back on the case, and is determined to find the thieves and ends up on Salamander Gurus door step. At the same time Min Hyuk confronts the two and asks for the whereabouts of the real Guru - he has his personal reasons for finding the real one. They refuse, but when he observes a client they strike him a deal: if he helps them, they’ll tell him the location of the real Guru.
Kyung Ja enters and talks about Mapo Lupang - the fake Guru tries to confuse her with fake info. When another crime happens fitting the Mapo Lupang M.O. with the pooping, except this time a murder has occurred. The three decide to solve this mystery, but are suspected by Kyung Ja who finds a coin matching to the Gurus, which the fake Guru mistakenly dropped at the crime scene…

Honestly? After the first episode I really wanted to cast away this drama, mainly because it made no sense, and damn bad acting! But after the first one, and numerous laughing occurrences, it grows on you. This trio really is fun, and they actually gradually become better at acting, at least Min Ho is (I wanted to cry seeing him at the beginning man!) There isn’t that much else than ridiculous comedy, and loads of cameos by idols, celebs and comedians. The storyline gets you interested, because you really want to know what the hell is going on in that place, but it’s not worth it if you aren’t into random humor, or a fan of Min Ho.
To sum up, not really worth your time, if you don’t have anything to do, but on the other hand a good break from melodramas and yeah, only 10 episodes.