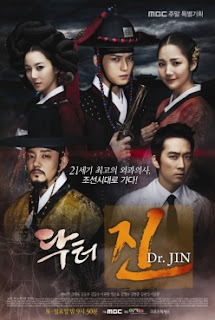 This is the Korean version of the Japanese drama JIN.
One night, Jin Hyuk (Song Seung Hoon) wakes up in a forest dazed and confused. As he walks he stumbles upon people fighting with swords and dressed in historical cloths. Believing they are actors filming a period movie, he approaches, only to witness a man getting slayed in front him. When he is noticed the people start to follow him, and he starts to run and almost falls of a cliff. Yelling for help, a man saves him in the last minute, where after he passes out.  Few hours ago he had surgically removed a fetus-looking-a-like tumor, from a badly hurt patient. That evening had been preparing to propose to his girlfriend Yoo Mi Na (Park Min Young), who is a fellow doctor at the same hospital where he is. But due to a fight the two spilt up in anger, and Mi Na ends up in a car accident witnessed by Jin Hyuk, who ends up operating on her, though with slim chances. Being upset he goes to the rooftop, and sees his badly hurt tumor patient, follows him and ends up falling off the hospital building. Coming to his senses he finds himself on the cliff, with his savior (Lee Bum Soo). He informs him that he is in Joseon in the year 1860, 150 years in the past. Not believing, he is stunned by the view striking him, untouched scenery.
Now the questions are: how and why did he come here?

This drama is a partial copy of the Japanese drama JIN, like the entire storyline is almost identical, except for the third love interest - JaeJoong.  It might have been because I am so fond of the Japanese drama that I really found the Korean version boring, and long. The scenes that should have been exciting were not, and the romance was just bad - like I felt absolutely nothing, not even a inch. I really felt bad for the supporting actor, like Dr. Jin was the reason for his misery, mostly, and then he just walks back to his reality and gets the girl he wanted. Like ruined a life of two - probably more - people and just walks back as if nothing happened.
I thought the acting was mediocre, but have to admit I was astonished by JaeJoong. Actually thought he did a good job, and I didn’t want to watch it in the beginning because I though his acting was bad - how wrong I was. In my eyes, he - and the brother of the leading female character - was the star.
The drama is okay, you can watch it, I just wasn’t too excited in watching it - that might’ve ruined it for me, but generally good drama. I think, again my personal view, if the drama only had focused on the historical par, without Jin in it, it would’ve been way better.