Soar into the Sun Movie Review 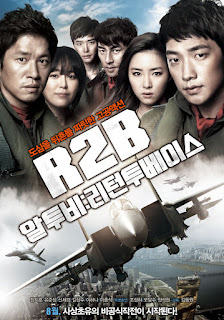 Title:  Soar into the Sun

After being transferred from the Black Eagles Air Force, elite pilot Captain Jung Tae Yoon (Rain) meets Major Yi Cheol Hee (Yoo Jung Sang) unit’s top gun (ace), the unit he’s transferred to. Tae Yoon was transferred because of his recklessness, so meeting a ‘by the book’ guy like Cheol Hee, the two bud heads. While at the unit, he gets introduced to the mechanic ace, Technical Sergeant Yoo Se Young (Shin Se Kyung), whom he instantly is attracted to, but it doesn’t seem to be mutual - she seems to dislike pilots. But somehow the two become closer, as they spend more time together, and they find out that the both share the same love for flying.
When a competition, an air-to-surface match between Eagle and Falcon squads, is around the corner, Tae Yoon gets the chance to get re-transferred to the Black Eagles, if he wins, but decides to stay.
Everything collides, when suddenly a threat from the enemy closes on.

Okay I kind of wrote this review plainly, but it is actually better in real life. The movie is good, but it has many flaws especially when you grew up with American action movies (which this is trying to copy in a way) like I did. There are many small things that bugged me, like nothing was really “intimate”, except for a couple of situations: by intimate I mean full hearted. The lead couple doesn’t have enough scenes, the major also needs a bit more heartbreaking scenes considering his past, and more than 30 min for the climax. I felt that the air force used too much of the movies time, WITHOUT being a part of the movie. On the other hand, very good made, like really quality movie! Acting wise, nothing I dislike.
Lastly, the recommendation is for people who like just the different kind of Korean action movie :D