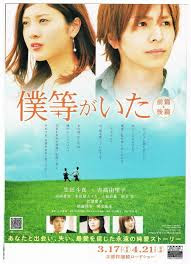 This movie continues 5 years after the departure of Yano.
Takahasi Nanami (Yoshitaka Yuriko) fresh from the university, is in search for a job, but for some reason isn’t able to land one. Takeuchi Masafumi (Takaoka Sousuke) finally gets a job and the two celebrate it, but the conversation mainly is about the school reunion that same week. It’s been 5 years since Yano Motoharu (Ikuta Toma) left and 3 years since he last wrote to Nanami, but Namami firmly believes that Yano will return, and can’t seem to let go, or rather refuses to do so.
Takeuchi destroys the dream of Yano ever returning by telling her a secret he’s been caring around: that Yano had returned a couple of years ago in secret, telling Takeuchi to take care of Nanami and that he is never coming back, which breaks Nanami’s heart.
Nanami, trying to forget Yano by focusing on work, getting more out and dating, starts to love life again, but that all changes when she one finds out about his whereabouts…

Compared to the first part the second part is a bit more grown up and serious, which I think is on purpose. The magic is that it is able to keep you entertained for another 2 hours after what happened in part 1. I think it was a really good idea parting this story in two, even though I was quite annoyed  at it at first because of it, I believe that it was a smart move, due to the growth that happens - which would’ve been little too sudden to be if it happened immediately.
Toma and Yuriko are a good couple, and great actors, and to be honest they fit their characters well. The thing that amazes me is how good the storyline is written, like these people actually react as normal people would - at least most of the time. Not that perfect human-being-mightiness that happens most of the time in either drama or movies.
To sum up, both movies, worth a watch - if you are into love stories.

To start with, I have not read the manga nor was I a fan of the anime. In fact, I am irritated with the anime. Except for the second lead, I dd not like the lead characters. I find Yano an ass and Nana such a whiner and clingy. So it came as a surprise for me that I enjoyed the movie. Maybe because it was Toma playing Yano, or something else but I the characters did not irritate me at all.

where did you watch this movie? could you please give me the link with english subs?!