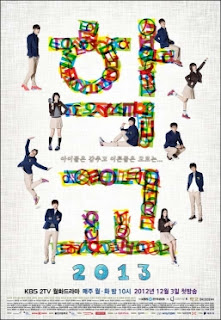 This drama is the fifth season of the popular “School” serial, which was the stepping stone for many famous actors and actresses.
Jung In Jae (Jang Na Ra) is literature teacher at Seungri High School, and with only 5 years of experience, she has never had a class on her own. When she is told she is to be the homeroom teacher of 2-2, she is somehow excited but also frightened. No other teacher wants the class, mainly because the class is unmotivated and rude, but also because of the infamous Oh Jung Ho (Kwak Jung Wook), a bully with no respect for anyone.
Go Nam Soon (Lee Jong Suk) is a student in that very class tries to stay out of everything from studying to other class related stuff. He is not interested in studying or getting involved with other classmates, and he usually sleeps in class.  One day, doing his part time job as a delivery boy, Nam Soon delivers to a lesson school  (sort of like a cram school, but paid by the students’ parents), he encounters Kang Se Chan (Choi Daniel) a cocky but famous lecturer, and also his fellow classmate Song Ha Kyung (Park Se Young) dressed in a different school uniform. On his way out, he is stopped by Ha Kyung wanting to pay him to keep his mouth shut - so that her cram mates won’t know - but Nam Soon has no interests.
The next day a classmate gets bullied by Jung Ho, and Nam Soon stops him by throwing a book at him. Nam Soon, who is usually targeted by Jung Ho, gets nominated as class president, and ends up being chosen which results in him getting involved in his classmate’s problems, with or without his consent.
At the same time Kang Se Chan gets enrolled in Seungri High School, as a literature teacher. And due to his famous reputation, parents want Se Chan instead of In Jae as homeroom teacher for 2-2. Se Chan’s teaching ways are different than In Jae, mainly because he is focusing on grades and tells students to leave the classroom if they don’t want to go to college, whereas In Jae just wants the students in class. This results in Nam Soon and Se Chan having a feud.
The two teachers end up both being homeroom teachers for 2-2, and Nam Soon starts to get used to school life, until one day a familiar face from his past, Park Heung Soo (Kim Woo Bin) joins the class. The class fears him, and the ‘top’ Jung Ho, tries to overpower him, but not with much success. For some reason Heung Soo resents Nam Soon to the core, and tries nothing to hide it - and Nam Soon for some reason would do anything to obey him…

Most defiantly my favorite drama of the year, or half year (2012-2013?!). I have to say my review/summary does not in any way make the drama justice - so bad. Like this drama made me do a varity of sounds from happy, to sad, to sobbing, to laughing and most yelling out loud. I mean, it’s been a while where I didn’t just focus on the heaviness of the love stories, like or the family problems, I could seriously sit back and enjoy the drama completely. Every single moment and also, for the first time in maybe ever, I found that 16 episodes was just rude. I mean, I wanted more, waaaaaay more, and I really wasn’t satisfied with the ending. Okay, good ending, but I didn’t want it to end! I loved all characters, some I wanted to punch, but still good acted. The only reason I didn’t give it a 5 stars is mainly because the drama should have been at least 2 episodes longer, I really didn’t feel it as finished and maybe just a little love story, nothing hardcore, but just a tiny bit more. But the drama is worth 5 stars, and really recommendable. Kim Woo Bin and Lee Jong Suk make a great performance, and so do the rest also - for newbie actors they are amazing.

Jenji's verdict
This drama really has all a high school drama needs. It has the good bad boys, the cool bad boys, the uncool bad boys, the bad boy followers, the best friends, the making up, the bromance, a tiny bit of romance which is perfectly fine in my opinion, and it has the korean crazy we-have-to-study-all-the-time, the crazy study-system, the crazy parents, the dedicated teachers, the "scary" teachers/ the tough punishing teachers, ect ect ect.. wait why did I mention all that? Anyway, just the bromance and friendship story is enough for you to watch this drama. It is one of my favorite things (kekekeke) and the actors WOW! did an amazing job playing their roles. It did remind a bit of the japanese high school dramas because we saw a lot from the teachers and they would "preach" to the students but it wasn't that much again. Though we did see alot from the teachers, and their personal lives. Or at least the struggles the teachers have to go through, that is if they are dedicated to their job. I definitely agree with Bunji that the ending could have been better, or they could have added more since it ended a bit too loose, or the story was a bit too thin. But then again it was decent. I recommend this drama to anyone who likes, well all the things I mentionen in the beginning. Especially bromance... hah!