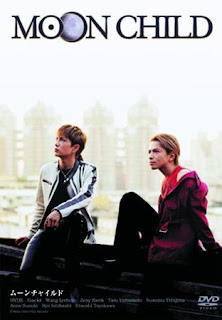 “Mallepa 2014. Resistance to new anti-immigration laws turned violent in Mallepa’s southern district. The area is mostly inhabited by poor Japanese immigrants who have been worst hit by the economic downturn. Such frustrations are thought to play a part in the demonstrations. Casualties run into the thousands but confirmation is still pending. According to police reports stability has been restored. As a Special Economic Zone, discrimination doesn’t exist. Mallepa’s founding principle is tax-free growth for people of all races.” (Taken from the introduction of the movie)
Sho (Kanata Hongo) and his older brother are orphans living in Mallepa as pickpockers, until they one day, meet Kei (Hyde) who happens to be a vampire. As Sho doesn’t care about Kei being a vampire, Kei starts living with them, and becomes close to Sho. Several years later Sho (Gackt) now in his twenties still lives with Kei and his friend Toshi (Yamamoto Taro).  Sho’s brother has become a drug addict, Toshi sells pizza with drugs, and Sho and Kei live off stealing from gangs, and manage to live pretty well, until one day when they meet Son (Leehom).

I watched this movie because Jenji one day told me that it was an amazing movie. Like, she honestly kept repeating herself every 10 min. That was maybe 3-4 years ago, but I didn’t watch it, because the storyline was nothing I would watch. And so the day came when I saw this file on asiatorrents, and I was like why not? I have to admit, I didn’t hate it. The story isn’t that good, and the length of the movie is so not fair to the storyline - seems too short - but I don’t think I would be able to watch more than the length it is.
Gackt and Hyde are honestly trying - I think - but somehow it seems a bit overacted, though that might be because of the age of the movie. They are both trying too hard in being hot; Gackt is just too Visual Kei to be a gangster and Hyde is not really the best actor in this role.
I don’t know if I recommend it, but I think it is an okay movie, even though it is 10 years old.

Jenji's verdict
I watched this movie a LONG time ago. I was only watching japanese drama, but not that many, but I knew a bit about Gackt. I do remember liking the movie very much, but yeah, now that I think about it I really don't think it was that special. It's just that Bunji remembers every word I have ever said no matter how long ago that was. So I cant really say that much about the movie. I guess it is alright. But really not the best out there hahah. I really have no idea what to say. Maybe you should just stick to Bunji's verdict. Hihih, so I'm really just gonna rate the same.