Time Between Dog and Wolf Review 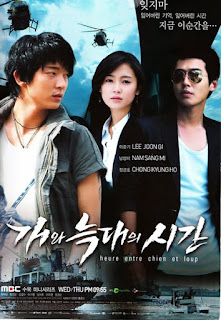 Title: Time between Dog and Wolf

Kay lives with his mother in Thailand who works as a prosecutor, and deals with the Thai-Korean mob. She made a promise with Kay that when she finally is able to deal with it completely they’ll return to Korea together. He lost his father at a very young age: he was an agent in the Korean force, but due to a secret assignment he lost his life, and is nowhere to be found, so Kay has never really gotten to know about him from his mother.  He meets Ari, a rich girl whose father is a gangster, but the daughter has never been involved in that business, but Ari’s mother is fed up with it so she seeks comfort in her house bends friend, and the two start an affair. Ari and Kay become close friends, but when Ari’s father finds out about the affair, he is keen on killing the lover, so Ari and her mother are forced to leave Thailand. At the same time Kay’s mother’s arrest goes wrong, and they are unable to arrest anyone useful, but leave’s a mark on Kay’s mothers back. That same evening Kay’s mother finally decides to tell Kay about his father, only to be killed in front of Kay, by a masked gangster who happens to be Ari’s father.
10 years pass, Kay, now Lee Soo Hyun (Lee Jun Ki) lives with his mother’s friend and the family with their son Kang Min Gi (Jung Kyung Ho), both with a good relationship. The two became trainees at the Korean National Force, like their father.  Even though Soo Hyun is a better police officer than Min Gi, the two’s relationship never had a stain, until Min Gi falls for a girl, who happens to be Ari, now Seo Ji Woo (Nam Sang Mi), whom Soo Hyun reconnects with…

I sort a feel bad for the rating, but I really am having a hard time with rating this drama. I have had the toughest time watching it. I actually found every episode long, and stuffy, not to mention draggy. Started watching it because of Lee Jun Ki, and was disappointed honestly. The Lee Jun Ki in this drama is over acting, way too much, and the chemistry with the lead actress is depressingly non-existent. I really didn’t like her character, tried, but unsuccessful. The one I like was Jung Kyung Ho, even though I don’t like the actor (or didn’t, now I do) - and that is because of his character, and decent acting.
The story is well thought, but just becomes… not boring but not catchy…  Some people might like it, I really think they would, loads of action and the entire revenge idea (reminds me a bit of City Hunter - just more messed up).