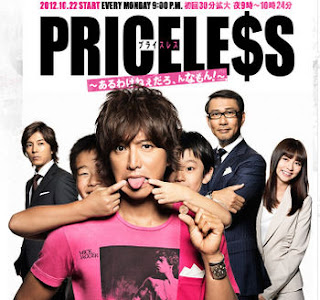 Kindaichi Fumio (Kimura Takuya) is company worker who earns good money and spends it. In his opinion you should use the money you have on things that make you happy instead of keeping them locked up in a safe. One day he is suddenly fired from his company, he is accused of selling information, somebody plotted this against him, that somebody is the new chairman who for some reason tries to keep Kindaichi far away from the company. As Kindaichi is on his way home with all his stuff from the office, just as he arrives in front of his apartment he sees his home explode! Now without any job, savings and no home, he is forced to spend the night in the park just as other poor people. The next morning he meets two kids who teach him how to get by without money, and they take him to their home, where he starts renting a room for 500 yen per day. Now he has to find a way to get 500 yen every single day, money he used to think was nothing.

Ahhh yes, this is Kimura Takuya, this is his work, his acting, making you love the character. Never fails. I really loved this drama, it shows that, having the will, talent and never giving up can make you go from bottom to top with just hard work. I liked Takuya’s character and the way he worked and actually I liked that it wasn’t the story where the character gets this revelation and changes because something bad happened in their life, but he stayed the same and just worked harder. I think it would be too typical otherwise and something we see too often. This is more.. normal kind of. Except it really takes talent to think and work like Kindaichi. Getting contacts easily and befriending everybody. But I liked how.. hmm.. Not complicated his thinking was. He was thinking about repaying those who have given something to him, or helping ordinary people without thinking of them paying back. Whereas the other characters actually did change a whole lot and went through a transformation. Aaaaanyway back to the point. A really nice short drama, I recommend it, I enjoyed it, wonderful acting by Kimura Takuya. Yokshi, this is Kimura Takuya.

Bunji's verdict
This is a good drama, like good good, not good great. It’s funny, interesting, and very new, but somehow it just has a boring factor to it. Kimura Takuya is and has always been a great actor, and you can see it in the drama. Though I have to admit that I was disappointed: The drama’s good points is the way everyone is portrayed and how they grow (if you watch Japanese dramas you should know that it’s actually a key factor for that to happen), but somehow, nothing really happens. Yeah the lead suddenly gets poor, and learns the value of 500 yen, but that is only in episode one. The rest of the episodes are about the supposed ‘growth’ that doesn’t really happen. And the ending was anti-climax if you ask me. Like pretty dull, you would hope for just a bit more of excitement…. But it’s not bad. I can’t really explain it. “A good drama, but just not thrilling” would be the best way to explain it..