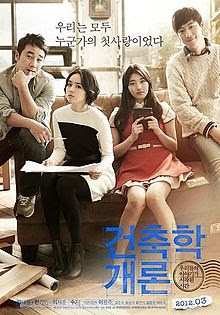 Lee Seung Min (Uhm Tae Woong) is an architect who does odd jobs and small assignments for his boss. One day his old school mate Yang Seo Yeon (Han Ga In) turns up and ‘gives’ Seung Min his first job, designing her old childhood house. After several of his ideas are turned down, one of Seung Mins co-workers asks about their past, and how they met.
17 years ago, young Seo Yeon (Bae Suzy) joins architecture class - the “Introduction of Architecture”, which young Seung Min also attends. The two happen to live in the same area, and both take the same bus home. For Seung Min, the moment he laid his eyes on Seo Yeon, he fell for her, and when he is approached by her and asked to do an assignment together, he can’t say no, even though Seo Yeon seems indifferent.
This movie follows the two timelines running parallel with each other, as we find out what has happened to this couple.

(Lousy summary, biyan!) This movie has been on my pc for a very long time, and I actually completely forgot about it. But to be honest I don’t really get it. Or yeah I do but it somehow is… Dull. Like I think the idea was good, but somehow everything was just slow paced, and you don’t really see any storyline, or I didn’t. The acting was good, but else, yeah 2 hours of random - well partially. It feels uncompleted AND short: like I don’t get how they could go 17 years without clearing up ONE misunderstanding, and how they are able to just continue with their lives, even though the feelings are back. I sort understand the concept, like first love and all but it sort of doesn’t have any depth, not really anyways. Yeah, I can’t recommend anything I don’t get…