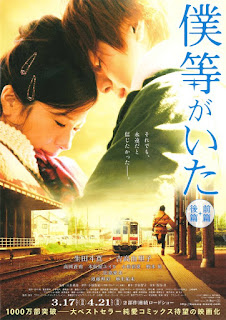 This movie is based on the manga by the same name.
Takahashi Nanami (Yoshitaka Yuriko) is a high school freshman, known to be completely honest in everything she says. When the classmates talk about boys, she isn’t really interested, until she meets the favorite topic Motoharu Yano (Ikuta Toma) on the school rooftop, sitting alone. She is immediately infatuated by Yano, and when he asks her to sit with him she can’t say no. While conversing, she notices how he seems sad and without will to live, so she begins to worry about him. Later that day, she and her classmates happen to talk about him, and he speaks rudely to her, she gets angry and leaves after calling him ‘the worst’. Being told that for the first time in his life, Yano is stunned, so he tries to make up for it, by helping her with her class duties. Slowly Nanami falls for Yano, but finds out about his past scars of his dead ex-girlfriend, whom he cannot forget. While sitting with him in class, she accidently confesses to him. Yano, not really loving her, tells her to date him, but for the honest and proud Nanami dating someone without genuine feelings is just cruel, so she refuses him. After a while, they start dating, but due to Yano’s past, he starts to ignore her, until Yano’s best friend Takeuchi Masafumi (Takaoka Sousuke) threatens to take Nanami away from Yano, because he is in love with her himself.
So he decides to take care of her, but can Yano forget his past love, and start loving Nanami, who loves him more than anything?

(Sorry about the lousy review, not my finest moment)
The one thing that hit me while watching this movie, was how typical of a manga storyline it is - with the entire honest and innocent girl meeting popular and complex boy - fall in love and get obstacles involving their pasts. And I never really expected it to be good, because the clichés and the storyline isn’t easy to live up to - but it surprised me how good it actually is. It is a real Shojo manga type, but yet manages to keep me interested, which isn’t that easy - since I’m not in that category, or prefer not to be due to the typical clichés.
But Yoshitaka and Toma do great jobs, and make it seem genuine; also manage to entertain me most of the time. The negative is that everything seems so sudden, and sometimes I became confused, which is common in Shojo, but not that great for movies.