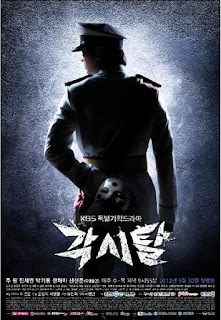 Set in the 1930's in the land that would become the Korean Republic, during the Japanese occupation, we follow the story of a hero. The hero known as 'Gaksital', bridal mask. Gaksital is the protector of the people, working against the japanese occupators, the government and regime. Lee Kang To (Joo Won) is a Korean young man working for the police. He is often confronted and molested because he isn't Japanese, but got into the police because of his great skills. Kang To bets his everything on catching Gaksital and is therefore extremely hated by the Korean people. He goes as far as torturing his own childhood friend and first love, Oh Mok Dan (Jin Se Yun), and manages to catch and shoot Gaksital, only to find out that it was his older brother, who was fighting in order to take revenge on the Japanese, responsible for their father's death. Having almost lost everything, he decides to take on the mission of revenge. He decides to keep working at the police office undercover, but meets trouble as his best friend Kimura Shunji (Park Ki Woong) joins as an officer to catch Gaksital, for the revenge of his older brother death, who was killed by Gaksital. This is the story about the struggle and opressed people, fighting for freedom and love.

Halfway through second episode I was so surprised and impressed that's when I understood why this drama was popular and knew I definitely had to watch. I was especially impressed by Joo Won's acting, as it was very different from what I had seen earlier.I reeaallly felt like looking up spoilers and finding out what's gonna happen like already from the beginning. It was almost too much to bear, I couldn't stand having to watch to find out what's gonna happen and get all questions answered. And of course I accidently spoiled a part, seriously if you are like me (don't read or watch anything about a drama before you start) then avoid such as tumblr and youtube aso, which is reeeally hard, but that's what I like the most and that's how I enjoy a drama the most, not knowing anything and just going with the flow. This drama really leads you through it all, it wasnt boring at all, and all these unexpected things happen ALL the time (unexpected if you havent seen spoilers). I was often confused because it is a very different historical drama, it is set in 1930’s and I kept thinking it was long before, so it was weird, but interesting as well. It has some really tough moments and I really cried like really badly. I really recommend it, it is a great drama with action, romance, friendship and revenge. It doesn’t get boring and just leads you through the episodes ;)

Bunji's Verdict
This drama is one of this year’s best dramas. Every actor does a great job, and all characters are brilliant. There are some small things that does take you aback, like the that 1/3 of the drama is about torturing people, like really, I think most characters were tortured. And the amount of people dying is like omg, like flies really. Then there is the entire “mystery” about “who is gaksital?” which is really exciting until people find out and then the tension suddenly lessens, lol. But it’s great, as it is. Joo Won is great as a villain, love him like that, and as the good guy he does a great job. I can’t get over of how good Kang To, Joo Won’s character, was at lying, totally believable, making even me believe him, even though I knew what really happened.

All in all a good drama, really recommendable. But be careful, the tension and the hurt actually can (and prolly will) break your heart, or at least make you get strong feels.