The Jackal is Coming Movie Review 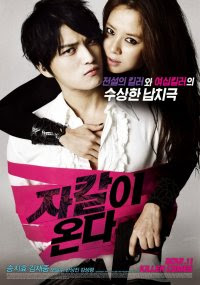 Bong Min Jung (Song Ji Hyo) is a female killer on a mission. She was hired to kill the famous singer and actor Choi Hyun (Kim Jaejoong) by his ex-girlfriend. Min Jung follows Choi Hyun to the unfamous hotel “Paradise” with the alias of a Japanese tourist. At the hotel, Choi Hyun was planning on meeting Angela, the wife of a CEO, whom he has an affair with, but is held hostage by Min Jung. In the beginning Choi Hyun thinks this is another act by his sesaeng fans and tries to prove that he isn’t the famous hallyu star, but several things happen and the two end up helping each other. All meanwhile the detectives are in the same hotel waiting for the killer Jackal to strike, searching the whole hotel and end up chasing the man they think is Jackal the killer all over the hotel. But in the end the story is more twisted than it seemed.

This movie is SO Korean. And I’m talking about those weird Korean movies with the weird characters and weird situations. Throughout the movie I wasn’t really satisfied and actually disliked it, but it’s Ji Hyo and Jaejoong so I wanted to give it a shot. If it were some unknown actors I would probably have given up in the beginning. But I guess it actually turned out to be pretty alright, the actors did do a good job and the ending was pretty alright. But it as an action comedy it wasn’t really my cup of tea I guess. But it isn’t a movie I would tell you not to watch. Because it does have some scenes I had to rewind and watch again because they were pretty hilarious.

Bunji's verdict
I am not sure about the rating since I really don’t what to rate this movie. It gave me huge laughs, confused me, occasionally bored me, and took me by surprised honestly. But it doesn’t leave me all into it, and the fact that this movie only happens in a 2 days span is not much help. As I watched this, I so felt bad for the lead actor, like poor guy - even though he was a prick - meeting 3 woman who make that night pretty hell. I wish there was more story behind, or after; I just felt a bit incomplete when it finished. JaeJoong and Song Ji Hyo do a great job, really entertained me and made the movie worth the time.

All in all, a decent movie :D