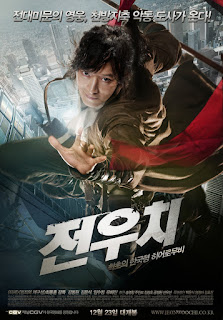 Being a cocky yet talented magician, Jeon Woo Chi (Kang Dong Won) tries with all means to become the most famous person in the Joseon Dynasty. Though he can’t really use magic without his talismans, his Master (Baek Yoon Sik) believes he has some potential. When the flute, that summons goblins and shows humans their true faces, happens to fall into Woo Chi’s hands, the great Hwadam (Kim Yoon Seok) hears about it, and together with the three gods, finds the hiding place. As the wizard master and Hwadam try to decide who shall keep the flute, it breaks into two, and both leave their separate ways.
Later that same evening Hwadam returns and kills the Master, blaming it on Woo Chi, and with the help of the three gods, sealing him in a painting.
500 years later, in modern days Seoul, goblins have been trying to find out what has happened to the flute, even holding a god and subduing him, but when the two other find out, they aid to rescue, only to be attacked by them. Unable to fight back, they re-summon Woo Chi, in order to have him destroy the goblins, which he does, but he has his own agenda: finding the great bronze sword that has been said to have amazing powers.

This is nice movie for fantasy lovers, even though it is ‘Asian’ fantasy, but till pretty good. It has some period elements, without being confusing. I love and have always loved Kang Dong Won, here he doesn’t disappoint me and does a neat job, really entertaining. Im So Jung is one of my favorite actresses, has been since Sorry I Love You, and still is. I am not sure whether I recommend it, unless you like this Wuxia stuff, I usually don’t but here it’s okay.