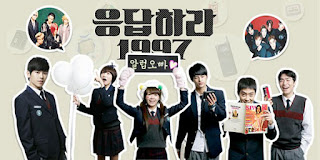 Sung Shi Won (Jung Eun Ji) is the ultimate H.O.T fangirl, to the point of her sleeping outside her idols house. She doesn’t care about school, or about being the second worst on her class. All her money, time and thoughts go the either H.O.T concerts or her swooning over Tony An. Her next door neighbor Yoo Yoon Jae (Seo In Guk) is quite the opposite, being number one in school, and actually being the best at everything. They two grew up together, and after Yoon Jae’s parents die in an accident, he and his brother Tae Woong (Song Jong Ho) tend to almost live with the Sungs. The two share a special bond, fighting and bickering all the time. Their friends, Kang Joon Hee (Hoya) number two in school and with a secret, Moo Yoo Jung (Shin So Yul) a ’loose’ girl loving falling in love, Bang Sung Jae (Lee Shi Eun) a pervert and Do Hak Chan (Eun Ji Won) the new kid from Seoul, wonder how on earth they manage to stay friends, but when Yoon Jaes brother one day tell Yoon Jae something, everything changes…

Wow. All that I can say is wow. I really didn’t expect it to be so good. I have heard a lot about it, but I never thought it to be as good as people said it was. Honestly, from the beginning all the way till episode 13, I didn’t feel bored at all, completely entertained. The actors were brilliant, the screen play, the dialogues and hell, even the nonstop jumping back and forward in time was genius! Like it made me really interested in the relations, and the script was written so good, that it kept you intrigued all the time. I totally understood every emotion, and reaction, though the brother-brother relation was a bit annoying, yet livable. Thumps up!
The reason it wasn’t 5 hearts is just the little dragging from episode 13 till 16, annoying me a bit, but if yo ignore that, it’s almost perfect.