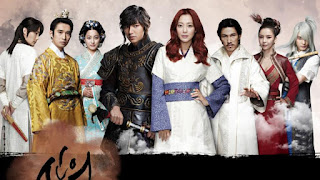 The Queen’s life is in danger, she was hurt while people were after the King. The Woo Dal Chi general Choi Young (Lee Min Ho) has been ordered to go through the Heaven’s Door and get the famous doctor Hwata, who once before came to their world to heal. And so does Choi Young, he goes through the door and arrives, but not to heaven, but rather the future. Here he somehow finds his way around and spots a woman, a doctor. Yoo Eun Soo (Kim Hee Sun) is a doctor, but a doctor who retired from being a general surgeon and instead took on plastic surgery. Eun Soo is literally dragged by Choi Young, back in time, where she has to use her medical skills to save the Queen. But what happens when it is ordered for Eun Soo to stay, and will Choi Young be able to keep his “Woo Dal Chi” promise of returning her?

I am quite unsatisfied by my own review. I often am but this I seriously should do better. I have a really tough time conveying to you the story, the plot, without telling you everything. It’s actually much much better than I thought it would be. I was struggling so much with the two first episodes actually. It just seemed sooo.. ridiculous. I was asking “seriously…?” all the way through. The reason? Well, they have “superpowers” of some sort, and it was already enough with the time travel, I was thinking it should stop there. But I really wanted to give it a chance, since it’s lee min ho, of course. Plus somehow Lee Min Ho’s acting seemed a bit stiff at first, maybe because of the character. So as I was complaining to Bunji how ridiculous it was and I thought it would seriously be good (because of tumblr) she told me these magical words “Ano san, trust Lee Min Ho, he wouldn’t choose a crappy drama right? And think about Secret Garden, did the portion/body switch make it a bad drama?” , or something like that. So I thought “That’s right!” and I’m really glad I gave it a shot because I am actually really satisfied by this drama. It actually worked out really well. And I really liked the romance too. And it also managed to keep me curious and hoping aaaalll the time, till the last scene in the last episode I was hoping so much and right when you think it’s over, what a crappy ending, it gets that last twist and boom. Nice ending. And the nice thing too is that it somehow in my opinion wasn’t even too much. It was “ttak” perfect. Kim Hee Sun was really cute too. Btw, this drama is also about the making of a king, and all the mess in the palace. Which I actually reeeally hate but it’s in most historical dramas, but I liked it here.

I’ve already wended my frustration of this drama to Jenji, but here we go. This drama is period drama with a capital P. Like I used all my energy to really understand this drama, and you somehow do, but damn it’s so political, and if you are like me, disliking period dramas, this one is going to fry your brain. I like history and I love that this drama is somewhat true to the real historical part, but this is just I don’t know, period to the bone. Don’t get me wrong, it’s good, but just, well not my cup of tea completely. I have to admit, this is Lee Min Ho’s best acting - very close to Personal Taste - but yet I guess cold attitude and the old formal Korean suits him more. I didn’t like Kim Tae Hee, not because of her character or even because of her being opposite Min Ho, it was more her acting - totally reminds you of the mid 20s kind of drama - not the best kind. The couple didn’t really have any chemistry honestly, I preferred to second couple, the one that didn’t even have a kiss scene, the King and the Queen, looked forward to every minute of their romance. And I loved the King; just the way the character was portrayed was amazing. The drama is interesting and action packed, so it isn’t lacking. All in all, it’s and okay drama, actually recommendable.

Lol, had 2 comment.. I can't believe I didnt read this any sooner.. The funny part is that ur summary is stiff as hell, but ur review is.. lol, nuts.. like totally "huuuuhhhhaaaa!" hahah...