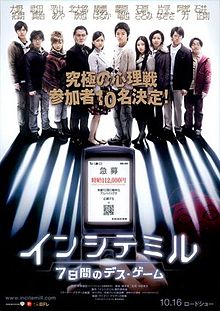 While searching for a well-paid part-time job, Satoshihisa Yuki (Fujiwara Tatsuya) meets Suwamei Shoko an OL, who tells him about a job that pays 112,000 yen pr. hour, in seven days, meaning 16 million in a week. Mesmerized by Shoko, Yuki agrees to the job, and together with Shoko and 8 other people, he is taken to a place called “Ankikan”.
The ten people are informed that they will be monitored 24 hours a day for 7 days straight in a psychological experiment, under lockdown: so basically they can’t escape. They are informed of rules: firstly they have to be in their rooms by 10 pm. Secondly when a crime happens they have to solve it, and if they figure out the criminal, they have to vote whether or not to imprison him. Lastly, the game finishes after 7 days or when two survivors are left. Paranoia starts, but they agree on mutual trust, until one of them if found dead the next morning…

One crazy ass movie! What the… Yeah, I did expect a lot of the things that did happen, but seriously? What’s up with Japanese and their enjoyment in seeing people murder each other! Man! Lol, and Fujiwara seems to like these kinds of movies, since he is mainly acting in that type of movies! Haha.. But that’s why we love him, right? :P Anyways, I liked it, had crumbles in my tummy and I actually had to stop several times, since it became just too freaky for me… Like, stop and walk around for a minute, and continue watching. Phew!