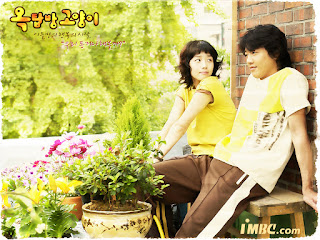 Lee Kyung Min (Kim Rae Won) is a law student, who has a crush on Hye Ryun (Choi Jung Yoon), a rich girl who happens to be the friend of Nam Jun Eun (Jung Da Bin), a girl he had embarrassed and fought with. He himself is somewhat a brat living alone, but raised by his spoiling grandparents, so money had never been a problem for him. In order to get on Hye Ryun’s good side, he decides to befriend Jun Eun, even lends her money so she can buy an apartment which was something she had wished for, so she can get away from her family, who want to move away from Seoul. But due to complications the two end up living in the same apartment, which is the start of an interesting relationship…

I usually sum up everything I watch in one word, but this one I had a bit hard time doing so. I mean I started with ‘typical’, but it really wasn’t a typical Korean drama. Then I thought it was ‘cliché’, but realized that it wasn’t. Lastly and the one I’m still thinking is ‘classic’: a classic Korean drama with a lot of typical clichés, but manages to be a bit different at the same time. I have to admit, I didn’t fancy it, since it reminded me a bit too much of Full House, which I btw didn’t like - and no surprise: same writer. There were scenes that caught me off guard with amazing acting abilities - like you could seriously see it on the face of the actor that he was heartbroken, that is damn rare! On the other hand I wouldn’t recommend it unless you like the typical “admit-you-love-one-another/jealousy-with-or-without-reason/refusing-to-be-together-due-to-ridiculus-fights-or-misunderstandings”…

Posted by Anonymous at Wednesday, November 21, 2012