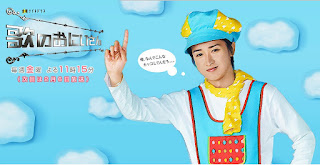 After the sudden disbandment of his band and his girlfriend leaves him, Yano Kenta (Ohno Satoshi) also loses his job, and to make matters worse, his father wants him to pay back money he used on him. As he is job hunting, he by accident enters the wrong door and is hired as an “Uta no Onii-san” (Singing Brother), a children’s singing program. With no other job offers, and a debt he has to pay, he decides to go, only to meet an annoying superstar everyone is afraid to make angry. The superstar has the concept of ‘children’s’ program completely reverse by trying to grab the attention of the mothers, and it made him famous. The staff doesn’t dare to do anything about it since if he leaves the show might lose the viewer ratings, and when Kenta speaks against him and even manages to change the focus away from him, the entire program gets renewed and Kenta starts to understand why his members decided to leave him…

To tell the truth I only watched this one because of Ohno, and I enjoyed that part a lot, but to be honest it is kind a cute. The entire lazy-ass rock star delinquent turning into a hardworking singing brother, and to top that a bit of Japanese “save the show” spice to add on. It’s just not for everyone, because it can seem a bit dull, but I found it pretty funny, even entertaining. I wouldn’t say that I completely recommend it, but it’s a okay time of spend a day or maybe to, like only 8 episodes :)