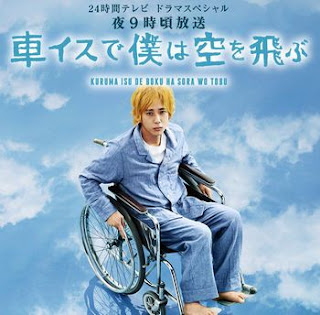 Haseba Yasuyuki (Ninomiya Kazunari) is a delinquent who lived life with no seriousness. One day he gets into trouble with a gang, and in the mist of running away he jumps from a building, only to wake up in a hospital being told that he will never walk on his own feet ever again, matter of the fact his entire lower body is paralyzed. He loses any wish to live, until he meets Ishii Daisuke (Suzuki Fuku) a little kid suffering from cancer and Kato Kumi (Ueto Aya) a store staff, to whom he slowly confides to. But when Daisuke gets transferred and Kumi suddenly quits her job, and is released from the hospital, he starts to grasp the reality of his disability. He starts feeling that he is “a bother” to other people…

Wow. That’s what I can come up with: wow. This TV SP is amazing, like from the story to the acting all the way to the screenplay. And omg, I love the messages conveyed... Completely different from other dramas this one touches your heart directly, and the characters grow on you with the speed of light. Ninomiya is amazing completely believable, and everyone make it just more realistic. There are some parts that don’t seem to work, like happening to sudden, or you don’t get it completely, but it grows on you. Though I can’t say that everyone will love it, I can say that most will like it :)