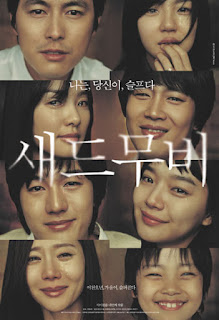 Lee Jin Woo (Jung Woo Sung) is a firefighter that works extra hard on his job. Wanting to pop the question for his girlfriend Ahn Soo Jung (Im Soo Jung) a news caster who is waiting for it, he is waiting for just the right moment, only to screw it up by losing the ring. Soo Jungs sister, Ahn Soo Eun (Shin Min Ah) is deaf and works in an amusement park, as a costume character. She falls for an artist Sang Gyu (Lee Ki Woo) in the park, but is afraid to take of her mask due to a scar on her face. Choi Seok Hyun (Son Tae Young) works as a part-timer in a convenience store, and breaks up with her boyfriend Jung Ha Suk (Cha Tae Hyun) for not having a job for the last 3 years. That makes Ha Suk finds a job, where he helps other couples split. Yeom Ju Young (Yeom Ju Young) is a working mother who has a bad relationship with her son Park Hee Chan (Yeo Jin Goo) due to her working all the time, but when illness hits her and she is hospitalized, things change..

Hmm, good storyline, star packed and greatly acted, so why don’t I love it? Firstly, too obvious because of the name (I knew that someone was going to die), second, the name, who calls a movie “Sad Movie”?! At first I thought the translation was off, but really it is “sadu mubi2 or something like that... silly.. Okay... thirdly, most of the script was little tacky, I couldn’t really deal with that, so it became long, just a bit too long. I was just expecting some things to happen, and I get bored if they take too long to happen. All in all, a good k-movie, but not my type…