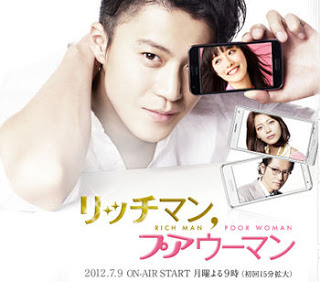 Hyuga Toru is a dropout from school and the C.E.O of his own established company, a billionaire. His company is a place where it’s all about being creative, creating new things, new ideas. It’s a company where things are the opposite of the traditional way or working. Everybody is relaxed, working together in joy. On the other hand there is Natsui Makoto (Ishihara Satomi) or as she calls herself Sawaki Chihiro. The typical hardworking student of Tokyo University who keeps failing at getting a job despite her good grades. She somehow ends up trying to get a job at Hyuga’s company. He believes he doesn’t need a person like her. The typical average student of the best university who does what she is told to do by the society, but he changes his mind when he hears the name Sawaki Chihiro. A familiar name to Hyuga, a name which makes him decide to hire her for a job.

Yes this drama has the typical rich man poor woman story but I liked it! Yes I know it’s Oguri and I’m a fangirl, but I really liked it. I liked Ishihara too, she was so cute hahah, it’s a really nice comedy with those funny inputs and all. And it was cute too. Hmm,, really don’t think I have anything negative to say, but! But.. we again had the “oh I love you but I wont be with you because you haven’t told me to be with you, you haven’t told me you love me” part. Yup. But it doesn’t ruin the drama. The drama is cute and simple and not draggy or anything. It did have the bit confusing part about Makoto and her job, like she keeps going back and forth with the job. Even the second lead actress was really good. It wasn’t the annoying bunch of crap shit we so often see. So really, the drama is really enjoyable.

I remember when I first heard if this drama - that was right after Kagi no Kakatta Heya finished - and so wanted to watch it, mainly because of Oguri Shun (like any sane girl with eyes), but also because Ishihara is one of the few Japanese actresses that I like, and they two make an amazing couple (combo).  Like Jenji said there are too many clichés in this story that it simply becomes just toooooo typical. Like the mean CEO, happy poor girl, successful close to CEO girl and the best friend of the CEO who is the only one that understands the CEO.  Of course the CEO has to have some traumatic childhood memories, and of course some illness - which only the happy poor girl can cure. And like Jenji said, the push-and-pull with the “can’t be together etc.”..
That said, I have to admit, I really liked it. Like the Oguri’s character was this socially awkward person and Ishihara was this Tokyo University genius that is so naïve and slow, you wonder how on earth she survives.
Acting against each other was probably the best thing any director could do honestly (*whispers* I think that this duo has beaten -many- couples out there..).
All in all, a very good drama, and partially light, basically meaning not so much love scenes, which is typical for a Japanese drama. And since it’s about the work they do, you suddenly become smart on business stuff.. (happens just too many times)