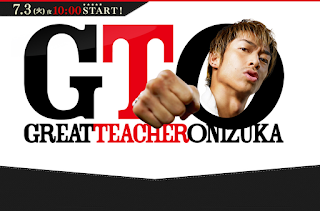 This story is the remake of the 1998 GTO.
Fuyutsuki Azusa (Takimoto) is a fairly new teacher in charge of the troublesome 2 : 4 class, who are known for being cruel towards new teachers and making them quit in matter of minutes. One day a part-timer knocks out the head teacher for calling drop out student’s trash in front of the director and Fuyutsuki. That man happens to be Onizuka Eikichi (AKIRA) who is the leader of a bike gang, and is known for his wicked side. The director notices that Onizuka has a special side, so she decides to make him the head teacher of class 2 : 4 to change them. But it isn’t as simple as it seems: the class is not only troublesome, they have a deep hatred for teachers..

Being a fan of the original GTO from 1998, I was actually expecting a lot, and honestly I was slightly disappointed, even though it had all the old highlights, with a spice of modern. I just don’t really see Onizuka in AKIRA, and I couldn’t help but imagining how cool it would have been if Akanishi Jin was playing Onizuka, which he was supposed to. Anyways, the drama is typical Japanese, and I love high school drama especially Japanese ones, hehe.. The acting was a bit.. Tacky, but I’m going to give it 4 stars, 1 for the storyline, 1 for the messengers conveyed in the drama, 1 for being able to make me watch it from beginning to end and the last one, for making me a bit teary in the end. All in all 4 stars, though I have to say, watch the original one.. It’s a bit better :P